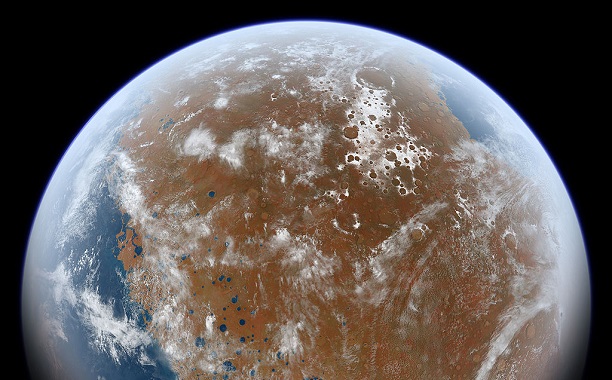 Mars was home to a massive ocean covering roughly 19 percent of its surface, according to astronomers who published their findings in the journal Science last Thursday.

The researchers used some of the most powerful telescopes in the world in their study, the findings of which reinforce prior evidence of water on the Martian planet’s surface.

The existence of the Red planet’s four billion year old ocean has been proven this time around by a team of scientists led by NASA’s Geronimo Villanueava of the Goddard Space Flight Center.

Villanueava’s study revealed that the chemical composition of the atmosphere’s vapor contains seven times as much to deuterium in proportion to its water as what scientists have measured here on Earth. As both planets began with identical proportions, the study’s authors were able to calculate how much water there once was on the alien planet.

The study’s lead author believes that the water probably would have pooled in the “northern hemisphere, which has a consistently lower altitude.”

A planetary scientist at Penn State, James Kasting, was quoted by National Geographic as having said that the results of the study “are quite believable” and that his guess was “that the true amount of water was much larger” based on reasoning derived from a paper he co-authored back in 2014 which argues that the early atmosphere of the Martian planet was unusually rich in heavy hydrogen and that a great deal of it escaped along with ordinary hydrogen, skewing any calculations based on today’s values.

Their results are quite believable […] My guess is that the true amount of water was much larger.

What do you think, was there really an ocean on Mars billions of years ago?