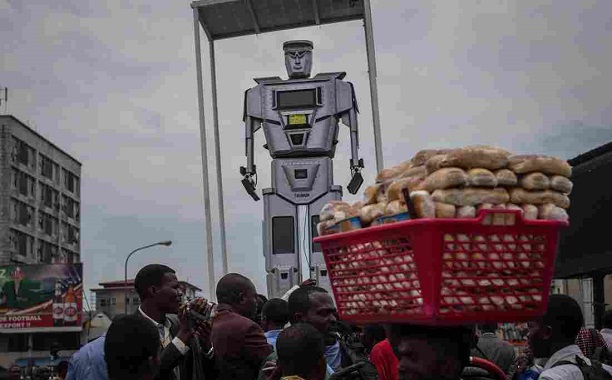 In the capital of the Democratic Republic of the Congo (DRC), massive camera-equipped traffic robots have been employed by authorities in an attempt to catch perpetrators of traffic offenses in Kinshasa, a city of nine million residents.

The Guardian reports that there are a total of five of these arm-waving robots equipped with lights scattered across the DRC. The report quotes a taxi driver, Poro Zidane, as having told the AFP that while there are those “drivers who don’t respect” traffic cops, they “should respect the robot”.

There are certain drivers who don’t respect the traffic police. But with the robot it will be different. We should respect the robot […] We’re very happy about it

The chests of the robots rotate and the attached cameras record the flow of traffic below, relaying the data in real-time to the police station.

Two of the bots have been regulating traffic since as early as 2013, but the three new additions were setup this past Tuesday according to reports which also indicated that female-engineered robots cost $27,500 a piece and include hand-mounted red and green lights used to regulate the flow of traffic in the city.

The president of the Women’s Technology group behind the robots, Therese Izay, was quoted having said that authorities will “be able to see” perpetrators of offenses in real time, day or night.

In our city, someone can commit an offence and run away, and say that no one saw him. But now, day or night, we’ll be able to see him in real time and he will pay his fine like in all the serious countries of the world

What are your thoughts on the the Democratic Republic of Congo’s new robot traffic cops?

Dubai Torch Erupts In Massive Fire, Flares When Wind Blows
Red Colobus Monkey Photographed For The First Time, They Do Exist
To Top