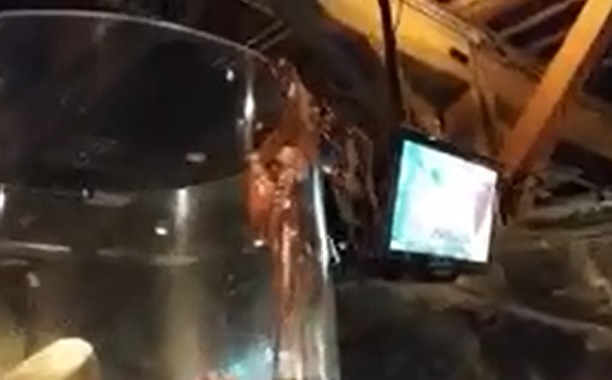 In this video first published on Live Leak this past Wednesday, a giant octopus nicknamed Ink can be seen scaling the walls of its tank in what appears to have either been an attempt to escape or explore its new environment at the Seattle Aquarium.

Octopus, like squid, have strong beak-like jaws, but instead of having ten arms (technically, eight arms and two elongated tentacles) like squids, they only have eight.

Q13 Fox reports that it seemingly attempted to topple over the lip of its enclosure before the aquarium’s staff helped retain the cephalopod mollusk and its eight sucker-bearing arms.

The sea animals, which mostly reside at the bottom of the sea, have soft bodies and their flesh is consumed as food.

After the video was published online, it quickly went viral and was subsequently covered by various news outlets; making it trending news, which is why you’re reading it here on Immortal News.

Within the past month, the Seattle Aquarium released a couple of its octopuses and the events were captured on video and uploaded the Internet. They can be seen below. The first is of Hazel’s release and the second is that of an octopus named Franklin being released.

The aquarium works regularly with giant octopuses, specifically the local species found in Puget Sound known as the Giant Pacific Octopus (GPO). The species is also referred to as the North Pacific giant octopus.

According to the New England Aquarium’s website, GPO are intelligent creatures capable of altering their appearance by changing their color. They reside in the waters of the Northern Pacific Ocean from Alaska through California where they inhabit rocky areas, caves and kept forests at depths surpassing 500 feet. They’re also found in shallow waters, near the shore.

The Giant Pacific Octopus, whose scientific name is enteroctopus dofleini, survives off of a diet of fish, shrimp, clams, crabs, scallops and other shellfish.

Their lifespan lasts anywhere from one to five years.

What do you think, was Ink’s viral video an attempt to escape captivity or was it merely a curious octopus exploring its new environment?