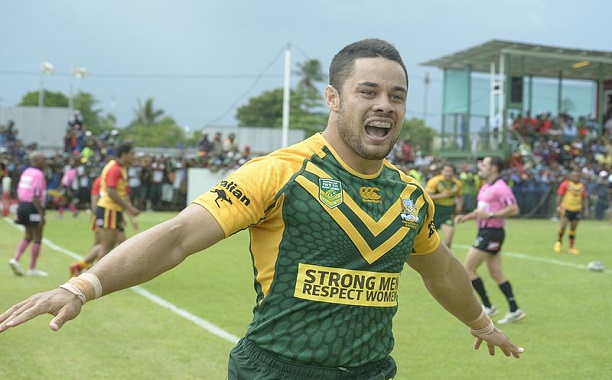 Why would a professional Australian Rugby League player that just retired from the sport choose to switch over to NFL football in the U.S.? It could be because Jarryd Hayne has a dream that he is turning into a reality. The 27-year-old athlete announced his decision on Tuesday at a news conference in Sydney to join the San Francisco 49ers. He picked this team over the other two interested teams, the Detroit Lions and the Seattle Seahawks.

The 49ers are taking a chance on signing on this 2014 Player of the Year with a three-year contract. Hayne just retired from the Australia National Rugby League after playing for the Parramatta Eels. After a meeting with 49ers coach Jim Tomsula, the 6′ 2″, 226 lb. athlete ended up with a guaranteed $100,000 and a three-year-deal with the team. It looks like he may be in the running to be either a punt returner or kick returner. Whatever is in his future, he is more than happy that his dream is coming true.

Today a dream becomes a reality. With God anything is POSSIBLE.

Back in October, the Australian talked about the reason why he was switching sports. He is aware of the ‘leap of faith’ that he is taking but says that his dream is bigger than being scared of taking that risk.

I’m always telling people to chase their dreams and follow their hearts — if I don’t live by that I’m not being honest with myself.

To get ready for his NFL debut, Hayne has been putting in some practice in the U.S. with NFL receiver, Tim Dwight. ESPN talked to Dwight on what he thinks the former rugby league player needs to accomplish before he is ready.

Jarryd Hayne is big, fast, and impressive on the field, but he may have his work cut out for him. Dwight says that he needs to learn how to take a hit. Some may disagree with that since Rugby League is said to be quite a tough sport. This is definitely the story to follow this year to see how he fares and how far he can go with his new career in football.