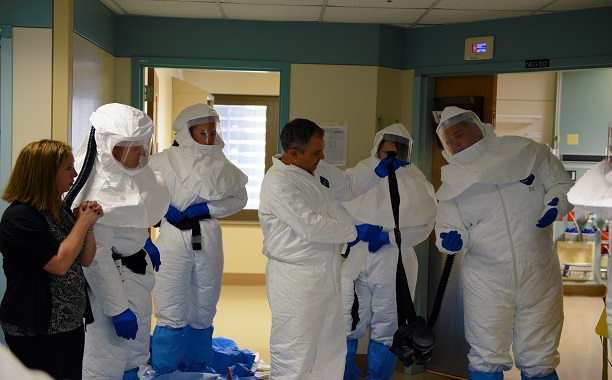 Nina Pham, the nurse who helped confront the first Ebola case in the United States at a Dallas hospital, has sued the hospital’s parent company, alleging it did not protect her before or after she was diagnosed with Ebola virus in the fall.

The lawsuit accuses Texas Health Resources of gross negligence, invasion of privacy and fraud. The lawsuit says that Pham’s training to treat Ebola patients consistent of reading information a supervisor obtained by searching on Google, and Pham wore protective gear that left her hair and neck exposed, according to the LA Times.

Pham and other nurses were also forced to wear contaminated scrubs home, the lawsuit alleges.

The 26-year-old contracted Ebola at Texas Health Presbyterian Hospital while she was treating Thomas Eric Duncan, 42, who fell ill while visiting Liberia in September and died October 8, two days before Pham tested positive for the disease.

After Duncan’s death, officials from Texas Health Resources and the CDC reportedly told Pham that she was at “no risk” for Ebola infection and was not placing friends or family members at risk. She also alleges that after she was admitted and diagnosed with Ebola, the hospital released information about her condition against her explicit wishes, according to CNN.

I’m facing a number of issues with regard to my health and my career, and the lawsuit provides a way to address them. But more importantly, it will help uncover the truth of what happened, and educate all healthcare providers and administrators about ways to be better prepared for the next public health emergency.

In October, Pham released a statement in praise of the hospital, saying she was cared for by the best nurses and doctors available. Her attorney, Charla Aldous, says it was an act. While Pham was grateful for the medical team’s work, the hospital put her at risk and then used her as a “PR pawn” after she became infected.

Amber Vinson, a second nurse who treated Duncan, was also diagnosed with Ebola. Vinson has retained a lawyer.