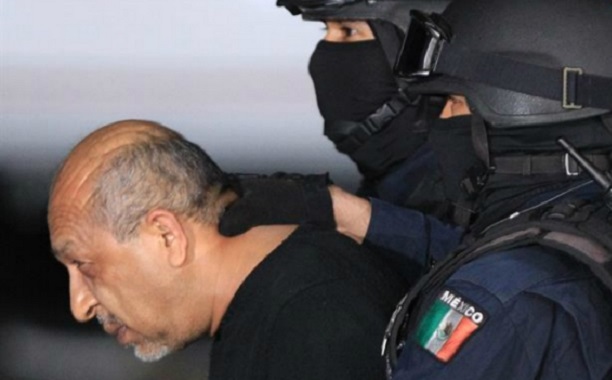 Servando “La Tuta” Gomez Martinez, the leader of the Knights Templar Cartel, has been captured by Mexican law enforcement after months of intelligence work which resulted in the kingpin’s arrest.

The arrest took place on Friday in Morelia, a city and municipality located in the north central part of the state of Michoacan in central Mexico. After his arrest, he was transported to Mexico City where the federal authorities paraded him in front of television cameras before placing him on a helicopter to be transported to the Altiplano maximum-security prison.

BBC reported that no shots were fired during the arrest and that the arrest came after months of gathering intelligence.

Prior to his capture, La Tuta, whose alias translates to “The Teacher,” was the most wanted drug lord in Mexico. The former teacher founded and lead the La Familiar Michoacana drug cartel before breaking off and forming the Knights Templar.

He was located by authorities after they managed to follow one of his messengers who was tasked with providing food and clothing for him. As he stepped outside of his house wearing a scarf and hat in an attempt to conceal his identity, Mexican authorities made their move and placed him under arrest.

Tuta, who reportedly planned to undergo facial surgery to alter his appearance, was arrested along with eight of his associates which included his financial officer, his brother Flavio Gomez.

After months of research, today I stopped Servando Gomez Martinez, an alleged leader of a criminal group.

El Profe, which translates to “The Professor,” was born on February 6, 1966 in Arteaga, Michoacan, Mexico. The 49-year-old former school teacher was indicted in the U.S. on charges of conspiring to import and distribute cocaine as well as methamphetamine in the United States from Mexico.

Back in 2009, Gomez called the Voice and Solution TV program and said, “We want President Felipe Calderon to know that we are not his enemies,” and went on to say that the now defunct La Familia cartel was “open to dialogue.” While he offered the Mexican federal government a truce in exchange for the freedom to continue the cartel’s activities in the illicit drug trade, Calderon’s government refused to strike a deal and ignored their calls to open up a dialogue between the two entities.

La Familia’s leader, Jose de Jesus Mendez-Vargas, was captured by Mexican security forces on June 21, 2011. A couple of months later, on August 7, 2011, the Mexican Attorney General indicated that the cartel had been disbanded.

The Templars Organization has been involved in feuds with the hyper-violent Los Zetas Cartel as well the Jalisco New Generation Cartel and Civilian vigilante and Militia groups.

Do you think the capture of Servando Gomez Martinez by Mexican federal authorities will result in a reduction in crime or is La Tuta’s arrest merely a minor blow to a criminal organization which will prove much more difficult to dismantle?