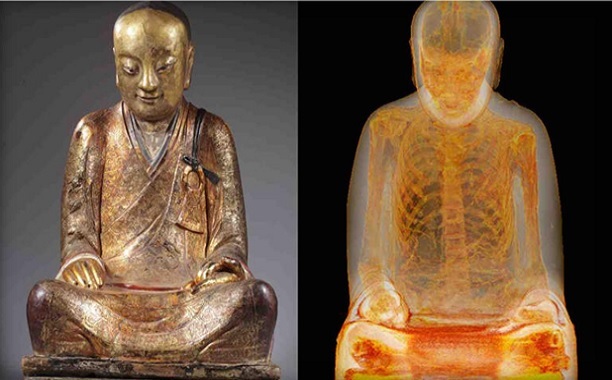 Researchers at the Drents Museum made a shocking discovery after scanning an ancient Buddha statue. The team found a 1,000-year-old mummy inside, sitting in the lotus position.

The mummified remains are believed to be those of Buddhist master Liu Quan, who was a member of the Chinese Meditation School, according to Discovery News.

On the outside, it looks like a large statue of Buddha. Scan research has shown that on the inside, it is the mummy of a Buddhist monk who lived around the year 1100.

After making the discovery in the Netherlands, researchers transported the statue to Amersfoort and performed additional CT scans and an endoscopy. A gastrointestinal specialist used the endoscope to take samples from the abdominal and chest cavities and found that the mummy’s internal organs were removed and replaced with scraps of paper with Chinese writing, according to CBS News.

The museum has speculated that Liu Quan “self-mummified” himself to become a “living Buddha.” The practice of self-mummification, typically performed in Japan, was a long and painful process that required the monk follow a 1,000 day diet of seeds and nuts to get rid of body fat, before eating bark and roots for another 1,000 days. After this period, the monk would drink poisonous tea made from Japanese varnish tree sap, which is normally used to lacquer bowls. The tea caused vomiting and a loss of bodily fluids, and may have made the body poisonous to insects and bacteria.

Once he became little more than a living skeleton, the monk was placed in a stone tomb barely larger than his body. The monk would then remain in the lotus position and ring a bell each day to let others know he was alive. When the ringing stopped and the monk was believed dead, the air tube was removed from the tomb. The tomb would be opened to see if the monk successfully mummified after 1,000 days.

Based on a 14th century textile roll found beneath the mummy, it’s believed that the body was worshipped in a temple and made into a statue in the 14th century, Fox News reported.

The statue spent seven months on exhibition at the Drents Museum in Holland before experts decided to give it a closer analysis. The owner, a private person in Holland, purchased the statue in 1996, unaware of its contents.

The statue and mummy are currently on view at the Hungarian Natural History Museum in Budapest. In May, it will move to Luxembourg.