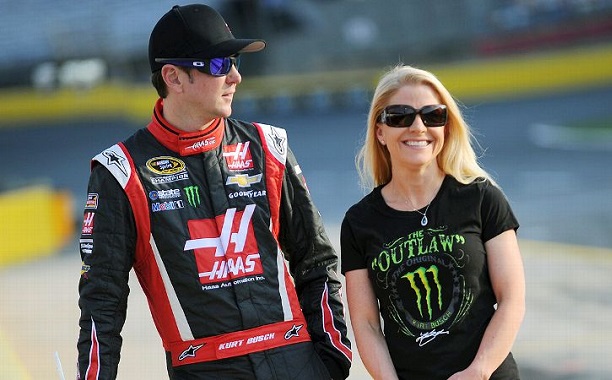 NASCAR officials have suspended Kurt Busch indefinitely after the commissioner presiding over his domestic violence case in Delaware’s Family Court said that the former champion almost certainly choked and beat his former girlfriend, Patricia Driscoll, and that there was a “substantial likelihood” for more domestic violence from him in the future.

The move, which came just two days before the Daytona 500, prevents Busch from competing in any NASCAR series activities until further notice. The ruling comes as a result of judicial findings and conclusions, as officials cited the “serious nature of the findings and conclusions” made by a judge in a Delaware regarding his domestic violence dispute.

NASCAR issued a statement which read:

Kurt Busch and his Stewart-Haas Racing team are fully aware of our position and why this decision was made (…) We will continue to respect the process and timetable of the authorities involved.

An attorney representing “The Outlaw,” Rusty Hardin, said that his client will appeal the decision and that NASCAR has indicated that the request would be expedited. He was quoted in a Tampa Bay report assuring everyone that “this sanction against” his client “will turn out to be a travesty of justice” and that it’s important for everyone to remember that it’s a civil matter and “no criminal charges have been filed against Mr. Busch.”

The indefinite suspension marks Busch’s third career suspension and the first time a NASCAR driver has been suspended for domestic violence.

NASCAR driver Travis Kvapil was arrested back in 2013 and charged with assaulting his wife, however, NASCAR took no action against him as a result of the allegations.

Busch previously claimed that his now ex-girlfriend is a trained assassin.

Busch, who drives the No. 41 Chevrolet, denies allegations of assault against his ex-girlfriend. Driscoll, who he was previously in a relationship with, indicated that she was at no point motivated by NASCAR punishing him, however, she was quoted having said that she was “very encouraged” to find that NASCAR had taken “steps to recognize that domestic violence is a serious issue” and that she hoped that we would all see them develop a very clear policy in regards to it.

I reported a crime, just like anybody else who has been abused should do, because no one is above the law (…) I’m very encouraged that NASCAR is taking steps to recognize that domestic violence is a serious issue, and I hope that we see them develop a very clear policy on it.

Chevrolet suspended their relationship with Busch. In his place, Regan Smith will drive the No. 41 Chevrolet for Stewart-Haas Racing.

ESPN reported that Busch had filed paperwork to appeal his suspension on Friday night. The appeal will be heard on Saturday in Daytona, according to NASCAR spokesman David Higdon.

The alleged assault took place the weekend of the first elimination race at Dover. According to Driscoll, she drove to the track out of concern for her ex-boyfriend after he sent her a couple of alarming text messages following a poor qualifying effort in which he was eliminated.

She said the two of them argued in his motorhome’s bedroom section before he slammed her head against a wall three times. She didn’t file charges until November.

The attorney general in Delaware has yet to decide whether Busch will be charged criminally for the alleged incident of abuse.

In other NASCAR news here on Immortal News, Jeff Gordon announced that 2015 would be his last full-time season racing.

Do you think NASCAR’s move to suspend Kurt “The Outlaw” Busch for allegedly choking and beating Patricia Driscoll is befitting?