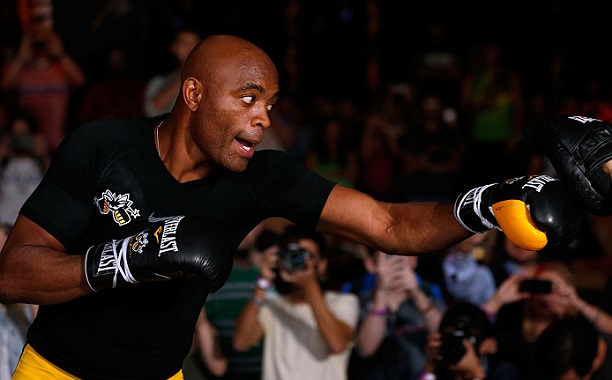 The former UFC middleweight champion Anderson Silva has been temporarily suspended following his post-fight drug test results which came back positive for steroids.

Bob Bennet, executive director of the NSAC, confirmed to ESPN on Tuesday that the 39-year-old former champion had failed his post-fight urine test after his January 31 win against Nick Diaz at UFC 183.

He submitted to a total of three NSAC tests in all and tested positive for both drostanolone and androstane on the January 9, provided a clean sample on January 19, and then failed another test on January 31.

The Brazilian mix martial artist and former UFC champ was initially facing a nine-months suspension for his initial offense. Bennet was unsure of whether the commission would increase the length of his suspension as a result of the post-fight drug test results.

Silva, who is widely considered to be the greatest fighter of all time, has denied taking any banned substances as he was quoted b ESPN as having said that he has “not taken any performance-enhancing drugs” and that he’s an “advocate for a clean sport.”

I have not taken any performance-enhancing drugs (…) My stance on drugs is and will always be the same. I’m an advocate for a clean sport

Bennet voiced personal concern that Anderson da Silva, who holds the longest title defense streak in UFC history, tested positive on the 9th, then came back negative on the 19th when it only stays in your system for 5-to-7 days. He indicated that this “gives an unfair advantage” and that he found it “concerning and unacceptable” as he cited the potential for “a serious injury” to occur while someone is on drugs.

Bleacher Reports‘ lead MMA writer Jeremy Botter confirmed in a tweet to his more than 14K followers that “The Spider” from Sao Paulo, Brazil had been temporarily suspended following the second failed test.

Anderson Silva temporarily suspended pending disciplinary hearing at future meeting. And that's it for that subject.

The NSAC issued a temporary suspension for Anderson on Tuesday. He’s scheduled to attend a required disciplinary hearing in March.

What are your thoughts on Anderson Silva’s drug test results?