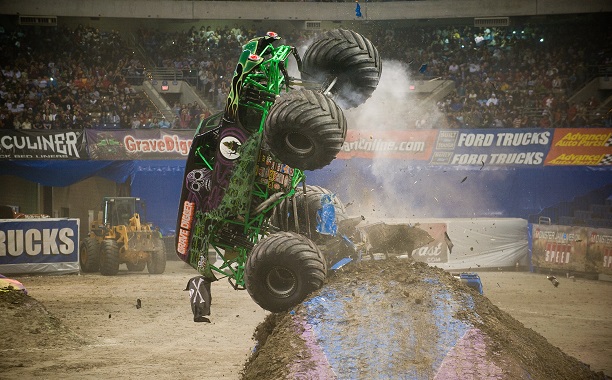 Monster Jam is returning to the Richmond Coliseum February 20-21 with a completely redesigned dirt track and more trucks than ever before.

The winner of the Pittsburgh Today Live giveaway, Logan McGinnis, scored some pit passes and got to interview the Grave Digger’s driver, Pablo Huffaker, at the Monster Jam Grid on Saturday at the Consol Energy Center. The 15-year-old receives therapy three times a week at the Children’s Institute for injuries sustained in a car accident more than a decade ago.

CBS Local Pittsburgh reports that the teen loves monster trucks and that he asked the driver of Grave Digger, “How are you going to do tonight?” To which Huffaker responded that he hopes to win and wants to “jump this thing higher and farther” than anyone else.

I hope to win every event that I participate in, I want to jump this thing higher and farther than anybody else here and I’m going to do bigger wheelies, you name it.

There are three performances scheduled at the Richmond arena which take place at the following times:

The show is scheduled to feature the four-time world champion, Grave Digger. The monster truck, which Dennis Anderson came up with back in 1981, is built out of an old 1957 Chevy Panel Wagon. It will be driven by tour veterans Huffacker and Randy Brown.

Carolina Crusher will also be returning to the 2015 Monster Jam in Richmond with driver Gary Porter behind the wheel after a 16-year hiatus from the high powered event which this year features ten trucks going head to head on the track.

Monster Jam trucks are custom designed and built machine measuring approximately 12-feet tall and roughly 12-feet wide. They rest atop tires measuring 66-inches tall and are built for high-powered bursts of speed, generating 1,500 to 2,000 horsepower with speeds up to 100 miles per hour.

The Party in the Pits, which offers fans an opportunity to get up close and personal with the trucks and drivers, will be held on February 21, from 11:30 a.m. to 1:00 p.m. at the Richmond Coliseum located at 601 E. Leigh Street in Richmond, Virginia. Passes for the pit party cost $10 for adults and $5 for kids (ages 2-12). Guests are required to have a Saturday 2:00 p.m. even ticket in addition to pit pass in order to enter. Space is limited.

Are you excited to witness massive trucks flying through the air at this year’s Monster Jam?