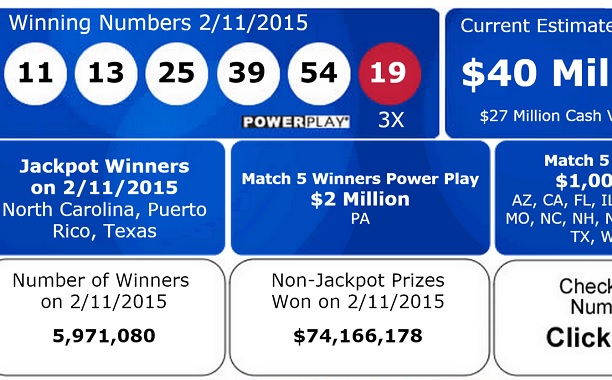 Three winning tickets in Wednesday’s $564.1 million jackpot were sold in North Carolina, Texas and Puerto Rico, according to an early Thursday announcement by lottery officials.

Officials didn’t yet know which cities the winning tickets were sold in.

USA Today reported that if the winners choose to take the lump sum option, the three winning ticket holders would split $381,138,450.16 before taxes. The report quoted Dave Baker of Tampa as having said that his co-workers “took out their wallets immediately” to pitch in their share on a collection taken up by Ben Taran and Baker at the Carrollwood Market where a $50 million ticket had once been sold.

They took out their wallets immediately (…) They were in and they were more than happy to be a part of it.

Taran was quoted in the report as having said that you get “that fever” and “it never goes away.”

The winning Puerto Rico ticket was the first Powerball jackpot winner ever sold outside of the continental United States, according to the Multi-State Lottery Association’s senior drawing manager Sue Dooley.

Puerto Rico joined Powerball less than a year ago.

There were also 33 tickets matching all but the Powerball that will garner an estimated $1 million a pop, while a single ticket matched all of the numbers except for the Powerball and a Power Play, NBC Bay Area reported. That ticket is worth an estimated $2 million.

A man in North Texas came within one number of winning the $380 million Powerball jackpot last Saturday, according to a release from the Texas Lottery. The man, Floyd Horn, will still walk away with just over $1 million before taxes after missing the red Powerball number (33) but matching all five white ball numbers (5-10-21-34-58). He purchased his ticket at the Cigarette Mart in the 600 block of N. Industrial Blvd. in Euless, Texas, KENS 5 reported on Wednesday.

Last we reported here on Immortal News, the jackpot was at only at $450 million, $114 million less than its latest estimate. The latest Powerball jackpot was the fifth-largest in U.S. history and the third-largest in the history of the game.

What would you do with your share if you just won the $564 million Powerball jackpot?