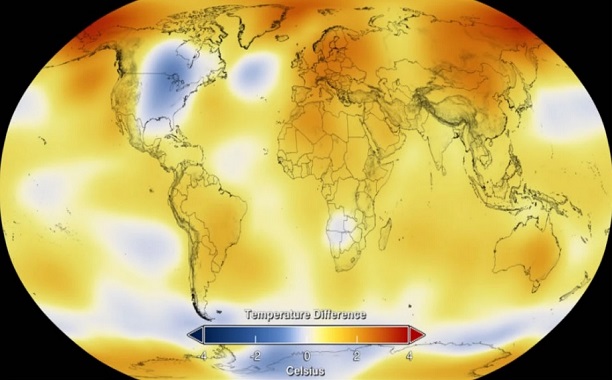 2014 was officially the warmest year in 134 years of temperature records, NASA and NOAA confirmed this week.

Global temperatures have reached the highest level in modern history, increasing concerns about humanity’s growing impact on the planet and challenging global warming skeptics. Average temperatures have passed previous records set in 2005 and 2010, in large part due to steadily warming oceans, and the ten hottest years on record have all occurred since 1997, according to the Washington Post.

Obviously, a single year, even if it is a record, cannot tell us much about climate trends. However, the fact that the warmest years on record are 2014, 2010 and 2005 clearly indicates that global warming has not ‘stopped in 1998,’ as some like to falsely claim.

During the year, large areas of the American West suffered from heat waves and droughts, while glaciers and ice sheets continued a retreat. Historic droughts have threatened water supplies in Australia and Brazil, while thawing tundra opened sinkholes in northern Canada and Siberia.

Heat records were set across large areas of every inhabited continent of the world, and ocean surface temperatures were unusually high everywhere except close to Antarctica, according to the New York Times.

Surprisingly, the record heat occurred in a year that did not experience an El Niño, a warm weather pattern that is associated with high ocean temperatures.

Of all major inhabited land areas, only the eastern region of the United States recorded below-average temperatures last year, as a dip in the Jet Stream sent Arctic air southward.