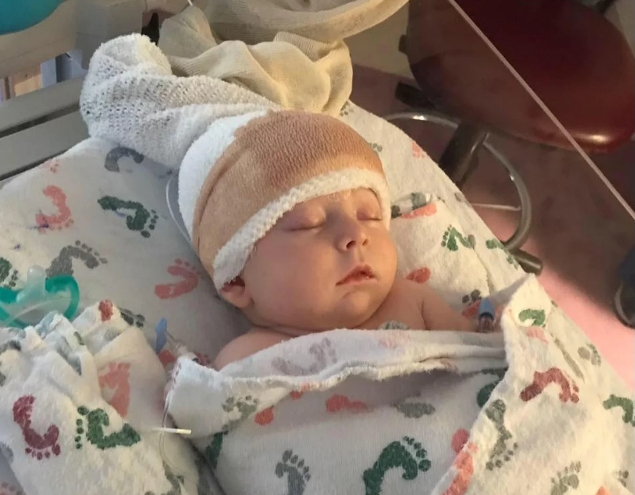 A 7-week-old baby in Minnesota is being treated for skull fractures and brain bleeds after the infant was hit on the head by a softball. She was watching her father play in northeastern Iowa.

According to officials, McKenna Hovenga and her mom, Kass, originally from Rochester, were watching the game on Wednesday in Shell Rock, when an overthrown softball struck the pair, who were sitting in the stands behind third base. McKenna’s father, Lee Hovenga, was playing in the recreational game, CBS News reports. This was the baby’s very first outing, aside from check-ups.

When another team took over, Lee took a break from the field and helped Kassy cover herself with a blanket in preparation for breastfeeding their daughter. Their attention diverted, the couple did not notice that a softball had launched over the fence in their direction.

McKenna was immediately taken to a local hospital, Waverly Health Center in Waverly, Iowa then flown to St. Mary’s Hospital at the Mayo Clinic in Rochester, Minnesota. She is now intubated and has a feeding tube in her, while doctors work to stabilize her seizures as a result of traumatic brain injury.

After she was hit, McKenna suffered from multiple seizures, some lasting as long as 15 minutes, PEOPLE reports. She had to be put in a “deep coma.” The status of her condition has been constantly updated by friends and family members.

A post on the Facebook page Healing for McKenna said that it has been 48 hours without a seizure for the baby, so doctors have started weaning her off her medication. A neurologist has also told the Hovenga family that McKenna’s brain activity seems to be calmer than before.

Asking for everyone to pray and keep your fingers crossed for continued good news!

A YouCaring page has been set up by the family for those who want to help.