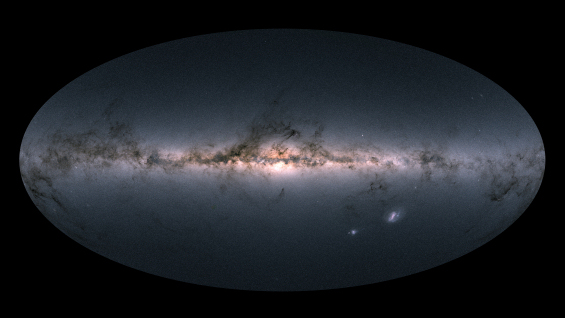 Gizmodo shared some exciting news from the European Space Agency (ESA). Astronomers of the agency’s Gaia mission have released the biggest map of our galaxy with data collected using the Gaia space telescope. This map includes 1.7 billion stars as well as new information that may provide answers to long-held cosmic mysteries.

The Gaia space telescope was launched in 2013 and began its galaxy-mapping mission. Two years ago, it released the position and brightness data for 1.1 billion stars and this year’s release called the DR2, the number jumped to 1.7 billion.

Why is this a big deal? According to Gaia Science Operations Manager Uwe Lammers,

It will be the most precise and complete stellar catalog ever produced.

He continued to explain that the DR2 expands the map’s reach from 500 to 8,000 light-years and will add further data on stellar temperatures, velocities, and parallaxes. Simply put, there’s more information about how the stars have moved compared to even farther objects, such as bright quasars in other galaxies.

Emily Rice, an astronomer from CUNY College of Staten Island and the American Museum of Natural History, said that “Gaia is an unprecedented map of the Milky Way galaxy, fundamental astrophysics at its finest, laying the groundwork for decades of research on everything from the Solar System to the origin and evolution of the Universe. It is at once foundational and transformative, which is rare in modern astronomy.”

There are so many different questions that can be answered using this new information as reference, but the DR2 still doesn’t provide the whole picture. It has some limitations that an infrared-detecting telescope may solve. Lammers is hopeful about the third data release that’s expected to arrive in the late 2020 because it will add spectral data a.k.a. the specific wavelengths of light that a star releases, which could help in determining what they’re made of.