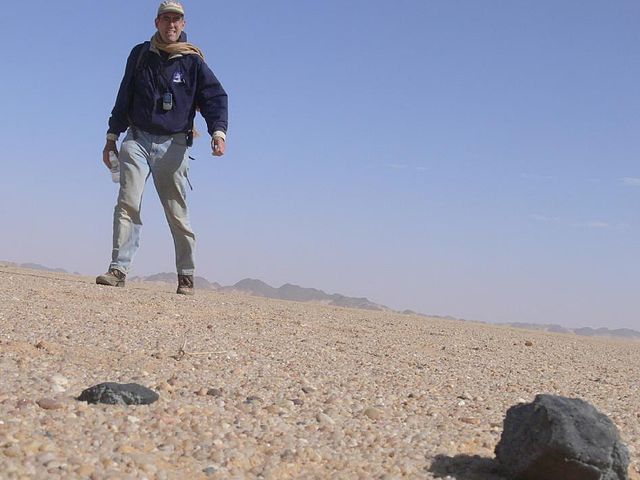 A space rock containing diamonds that exploded in Earth’s atmosphere back in 2008 was part of a planet that was lost in the early solar system, a new study suggests.

Researchers used three kinds of microscopy to find out about the mineral and chemical make-up of the rocks carrying diamonds found scattered in the Nubian desert of northern Sudan after the asteroid 2008 TC3 crashed into the atmosphere, the BBC reports. The scientists argue that the pressures needed to make diamonds could only happen in a planet the same size as Earth, meaning these meteorite crystals are the first compelling physical evidence of an ancient foundation from the earliest days of the solar system.

Some of the materials in the diamonds have been trapped since formation, known as inclusions, can only form above pressures of 20 gigapascals (GPa), which the researchers say “can only be attained in a large planetary body.”

Farhang Nabiei, from the École Polytechnique Fédérale de Lausanne in Switzerland, say that the measurements they made provide “the first compelling evidence for such a large body that has since disappeared.” Their findings also support the theory that this solar system and its planets were created from the remains of huge “proto-planets.”

The space rocks from the collision that happened are categorized as ureilites — objects containing high concentrations of carbon manifested as diamond and graphite — which make up less than 1% of objects that collide with Earth. The researchers suggest that ureilite asteroids may be remains of one proto-planet, writing, “Mars-sized bodies (such as the giant impactor that formed the Moon were common, and either accreted to form larger planets, or collided with the Sun or were ejected from the Solar System. This study provides convincing evidence that the ureilite parent body was one such large ‘lost’ planet before it was destroyed by collisions.”

The study was published in Nature Communications.