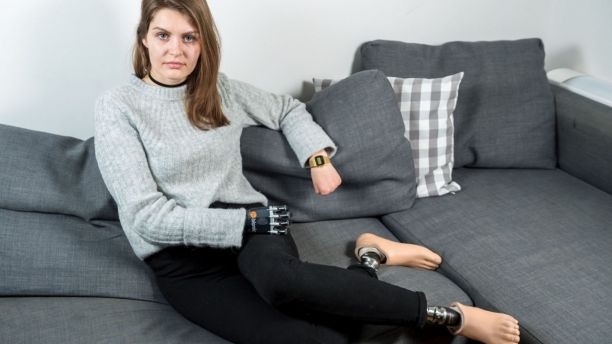 A woman in England is suing a hospital reportedly after doctors had to perform multiple limb amputations because they didn’t realize right away that she was suffering from a life-threatening condition.

Magdalena Malec, 31, contracted sepsis and needed to have both of her legs amputated at the Luton and Dunstable University Hospital in Luton. Her right arms and the fingers on her left hand soon followed, which hospital authorities said could have been prevented, Fox News reports.

The mother of two was told by doctors that she had suffered a miscarriage just a few weeks after she learned that she was pregnant with her third child in December 2014, according to the South West News Service (SWNS).

Malec was sent home from the emergency room with painkillers for her stomach cramps and profuse bleeding. She reportedly had to return to Luton and Dunstable later in the same month, where she found out that she had an ectopic pregnancy, wherein a fertilized egg attached to a cavity outside the uterus, and had to undergo emergency surgery. She was also told that she needed a kidney transplant.

But while in recovery, Malec developed ischemia of the limbs – a lack of sufficient blood supply to parts of her body. Her limbs then developed gangrene and much of her body tissue died, which Malec says the hospital staff should have recognized as symptoms of sepsis.

Just six weeks after the incident, Malec underwent surgery to amputate her limbs, then returned to the hospital three times a week more for dialysis for her kidney.  Malec said,

Nothing will restore what I had. I will never paint my nails again, I will never make a ponytail for my daughter. I do not trust doctors and I am very skeptical about all medical appointments and diagnoses.

Malec, who is mother to a nine and a seven-year-old, said that she now has to relearn how to live her life. “I am learning how to live with pain. Going out and coping with the way people look at me is very difficult, and so is self-acceptance,” she said.

David Thomas, Malec’s legal counsel, said, “The catastrophic chain of events which led to Malec’s near death and horrendous injuries were completely avoidable if the hospital trust had followed its own sepsis protocol.”

The National Health Service has reportedly apologized, and acknowledged that Malec’s situation could have been avoided. “There were missed opportunities to recognize the progressive clinical deterioration of Malec and act accordingly, including the timely administration of antibiotics. We convey our sincere apologies to Malec and we recognize the care provided fell below the standards we strive for.”