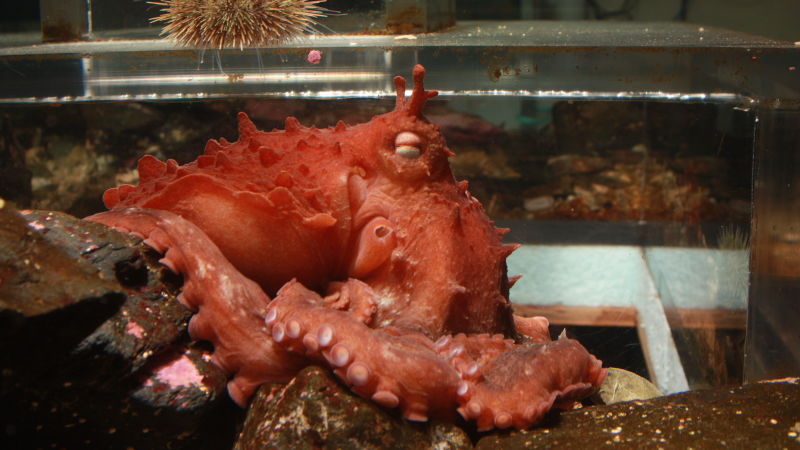 A species of giant octopus has apparently been hiding in plain sight for decades, surprising scientists – and the rest of the world.

The giant pacific octopus is the largest known octopus, ranging in habitat from California to Alaska to Japan. But it’s actually two species, one of which is the frilled giant octopus, Earther reports.

Scientists have suspected for years that the giant Pacific octopus might be an “umbrella name” for more than one species. In 2012, researchers from Alaska Pacific University and the US Geological Survey discovered that there was a genetically distinct group of these octopuses in Prince William Sound, but were only able to collect small arm tissue samples before returning the octopuses to the wild.

Shrimp fishers in Alaska use baited pots, lowering them into the sea for a day then pulling them up to get the shrimp. Sometimes, an octopus clambers into the pot. Hollenbeck said,

Usually the octopuses have eaten the shrimp, so there’s a lot of shrimp shells and legs and antennae.

Hollenbeck found that it was easy enough to identify two kinds of giant octopus by just looking at them. One was the GPO, while the other had a notable frill along its length. The frilled octopuses also had unique “eyelashes” of raised skin, and had two white spots on the front of their heads.

To confirm, Hollenbeck snipped off tiny bits of the octopuses’ arms and collected DNA by swiping the octopuses’ skin to avoid repeating this invasive procedure. DNA tests showed that the frilled octopus is a different species from the GPO.

David Scheel, Hollenbeck’s adviser, said, “Presumably, people have been catching these octopuses for years and no one ever noticed.”

There is not much known about GPOs, much less about frilled octopuses. Scientists at the Alaska Fisheries Science Center endorse “very conservative” management “due to the poor state of knowledge of the species composition, life history, distribution, and abundance of octopus.”

The study was published in the American Malacological Bulletin.

Starfish Are Coming Back, After Wasting Syndrome Killed Thousands
2018 ‘Girl Of The Year’ Doll Is An Aspiring Astronaut
To Top