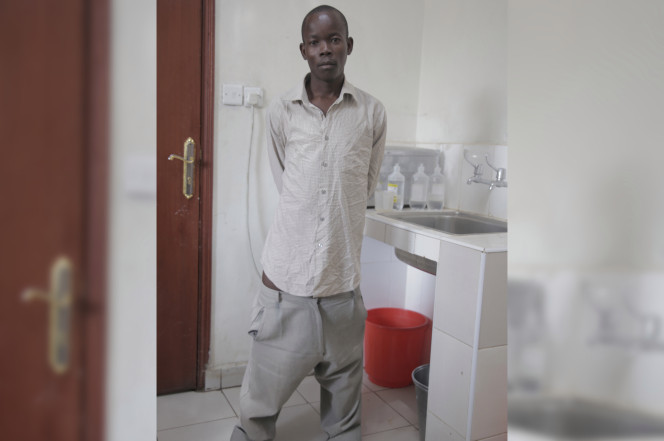 A man in Kenya can finally enjoy more freedom in his pants after his three-foot-long penis and 11-pound testicles have been surgically reduced.

Horace Owiti Opiyo, known as Forence, noticed a growth on his genitals in 2006, and had it removed. Unfortunately, the cyst returned with a vengeance the next year, resulting in his penis extending to almost a meter long, the New York Post reports.

Forence, 20 years old, was forced to leave school and did not have the funds needed for corrective surgery. He tried using herbal treatments to alleviate his condition, but none worked, The Mirror reported.

He believed he had been cursed. Forence said,

I told my grandmother that I have been infected by a disease, but I’m not sure what it is. It could be a curse. I knew this was not God’s work, but the devil’s.

This extreme condition can be caused by a mosquito bite that injected larvae into the bloodstream, which then developed into parasitic worms that block drainage and cause swelling.

Neighbors put Forence’s story on social media, where it quickly went viral, snagging the attention of a local governor’s wife. She sent a doctor to check on Forence, and he was soon given two surgeries to reduce the enlarged scrotum and rebuild the penis so that it could retain its function.

Forence said he is immensely relieved. After the operation, he said, “When I got up I was surprised that my body was so light. All the heaviness had gone…I’m swimming now. I couldn’t go anywhere near the water because of the heaviness of that thing.” He added, “Now I can run and I can play football.”

All his genitals are intact and functional, and Forence hopes to start a family in the future. But for now, his primary goal is to finish his education. He stated, “I’m free!…Who knows what will happen in the future?”

Experts Considering A Third Vaccination To Stem Mumps Outbreak
Heart Surgery May Be Less Risky In The Afternoon, Study Suggests
To Top