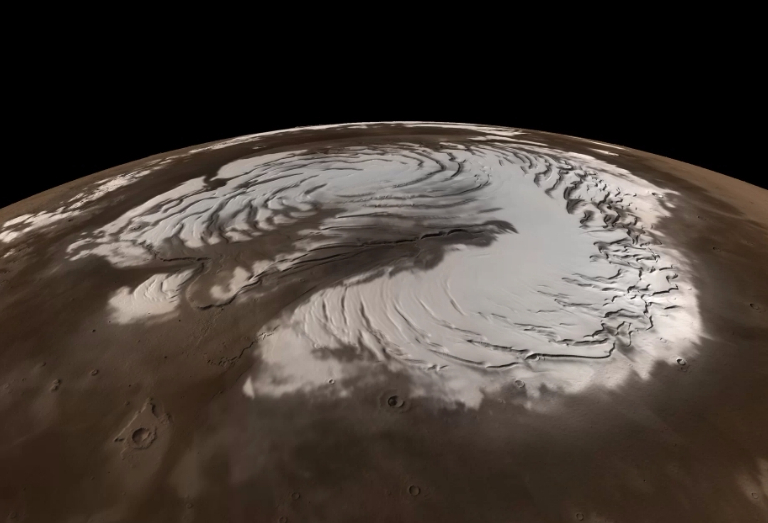 The atmosphere on Mars may be much more dynamic that scientists previously thought – the planet may actually experience snowstorms at night.

The Red Planet is extremely dry and cold compared to Earth, making it unlikely that any of the ice on its surface would melt. In addition, its thin atmosphere would not allow any liquid water to hold its form, although the atmosphere does have clouds of frozen vapor, Space.com reports.

Prior research has suggested that if there was snow on Mars, it would drift down very slowly. Aymeric Spiga, a planetary scientist at the University of Pierre and Marie Curie in Paris, said, “We thought that snow on Mars fell very gently, taking hours or days to fall 1 or 2 kilometers [0.6 to 1.2 miles].”

But Spiga and his team recently discovered that snow can happen on Mars in the form of storms. “Snow could take something like just 5 or 10 minutes to fall 1 to 2 km [0.6 to 1.2 miles].” The researchers were looking at data from NASA’s Mars Global Surveyor and the Mars Reconnaissance Orbiter when they spotted a strong mixing of heat in the planet’s atmosphere at night.

Spiga said, “You expect heat to get mixed in the Martian atmosphere close to the surface during the daytime, since the surface gets heated by the sun.” This was a first. “My colleague David Hinson at Stanford University and the SETI Institute saw it higher up in the atmosphere and at night. This was very surprising,” Spiga explained.

The researchers came up with an atmospheric model to simulate how the weather on Mars would happen. They found that when water-ice cloud particles cooled down during a Martian night, it could create an unstable turbulence within the clouds.

This can lead to strong winds, vertical plumes going upward and downward within and below the clouds at about 10 meters [33 feet] per second,

Spiga said. This would be equivalent to moderate thunderstorms on this planet.

Such snowfalls would quickly turn to vapor when the sun rises, though, “unless it was in a very cloudy region or high latitudes,” Spiga said. “This is something observed on Earth sometimes, with something called virga — streaks of rain falling from the clouds can vaporize before reaching the surface.”

In 2008, NASA’s Phoenix lander found traces of snow, which could very well be a result of these snowfalls. Spiga said, “We are able to explain two different mysterious and surprising observations with a single meteorological phenomenon — these snowstorms.”

The study was published in Nature Geoscience.