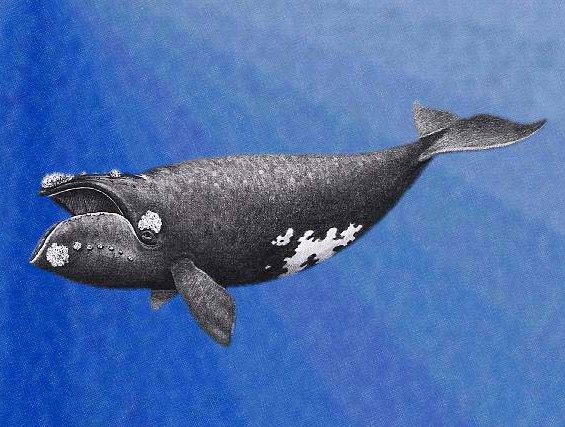 It’s rare for scientists studying critically endangered North Pacific right whales to actually see one. But this weekend, researchers on board a vessel in the Bering Sea got lucky.

Two whales were spotted and photographed last Sunday, and the researchers were even able to get a biopsy sample from one of the animals, The Washington Post reports.

According to Jessica Crance, a biologist from the National Oceanic and Atmospheric Administration, the team was on board the Yushin Maru 2, which is part of the Pacific Ocean Whale and Ecosystem Research program. The program is an international effort led by the International Whaling Commission.

Crance was able to pick up faint calls of a right whale east of Bristol Bay in Alaska, while she was listening to sounds of killer whales and walruses on an acoustic recorder. The right whale sounds came from around 10 to 32 miles away, and the vessel turned west.

After four and a half hours of travelling, the slow, buoyant whales were finally spotted despite the minke and humpback whales in the area.

There were two right whales, which are part of the eastern population that numbers between 30 to 50 whales only, said Phillip Clapham, head of the cetacean program at NOAA’s Alaska Fisheries Science Center in Seattle.

In 1835, a French whaling ship documented the first hunting incident, recording that there were “millions” more. Clapham said that though the statement was exaggerated, it drew plenty of other whalers to the Gulf of Alaska and the Bering Sea.

In as little as 14 years, Clapham explained that over-hunting of right whales resulted in whalers looking for bowhead whales instead. The animals started growing in number again in the 20th century, but Soviet whalers in the 1960s illegally hunted eastern stock right whales, he added.

The last time a right whale was sampled was a decade ago. A biopsy sample, Clapham said, can identify an animal, show its gender, and reveal more information such as reproductive hormones, age and diet.

North Pacific right whales are difficult to study because reaching their natural habitat in the Bering Sea and Gulf of Alaska can get expensive. There is much more to learn about them, including where there summer feeding areas are and their winter habits.

Clapham said, “We don’t know what habitats continue to be important to the species.” The biggest threat to right whales are ship collisions and entanglement in fishing equipment.