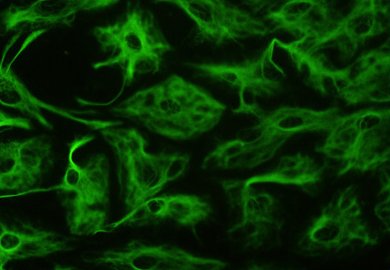 Not getting enough sleep may burn out the brain and increase the risk of developing Alzheimer’s, a new study says.

An Italian study found that the brain cells that destroy and digest worn-out cells and brain debris in mice went into overdrive when they were chronically deprived of sleep, New Scientist reports. This could be beneficial in the short term, as this means potentially dangerous debris and worn circuitry are cleared, protecting the remaining health brain connections.

But it could also explain why people who experience a chronic lack of sleep are more at risk for Alzheimer’s disease and other neurological disorders, Michele Bellesi of the Marche Polytechnic University said.

Bellesi and a team of researchers studied the effects of sleep deprivation in mice. They compared the brains of mice that were allowed to sleep for as long as they wanted, and the brains of mice that were kept awake for an additional eight hours. A third group of mice were kept awake for five successive days, replicating the effects of chronic sleep loss.

The team focused on glial cells, which make up the brain’s “housekeeping” system. Previous studies indicated that a gene that regulates these cells is more active when there is not enough sleep. One type of glial cell, an astrocyte, clips off unnecessary synapses in the brain to fix its wiring. Another glial cell, the microglial cell, looks for damaged cells and debris to clear out.

This means that perpetual sleep loss can trigger astrocyte activity so that they break down more of the brain’s connections. Bellesi said,

We show for the first time that portions of synapses are literally eaten by astrocytes because of sleep loss.

In addition, the team found added microglial cell activity in the chronically sleep-deprived mice. “We already know that sustained microglial activation has been observed in Alzheimer’s and other forms of neurodegeneration,” he said.

The researchers intend to investigate further into whether getting more sleep can protect the brain from these activities, and how long sleep deprivation effects last.

The study was published in The Journal of Neuroscience.