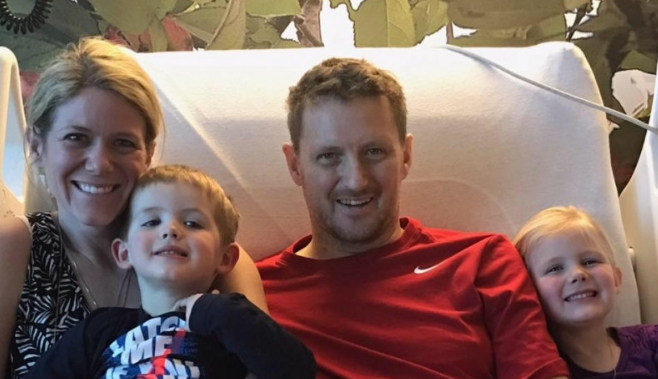 A man in Michigan who thought his stomach pains were nothing unusual suddenly found that he will lose his hands and feet after doctors diagnosed him with a rare and dangerous form of strep throat.

Kevin Breen, 44 and father of two, was first admitted to the emergency room in December for what doctors initially thought was acute mild pancreatitis, Fox News reports. Breen said, “It didn’t seem that unusual. I never thought [I’d be] going in for a stomachache and coming out a totally different person, and [it’s] life-changing.”

Breen’s son had been diagnosed with strep, but a blood test came back negative for any infections. But then his CT scan showed that Breen’s stomach was filled with pus, causing the pains, and that his organs had begun shutting down.

He was one of the sickest patients that we’ve ever taken care of. It was almost a mystery.

Doctors had to redirect Breen’s blood flow to save his organs, which in turn cut off the blood supply to his hands and feet. A rash indicating a possible strep infection appeared on his body eventually, but by the time a test was completed and he had taken penicillin, it was too late. His hands and feet have to be amputated.

Steensma said it’s very rare for a strep infection to go from the throat to the stomach, and Breen is only the second documented case with a male patient.

Breen was released from the hospital and is recovering from the first surgery, where doctors amputated his right foot. Julie, Breen’s wife, said her husband would eventually have to get prosthetic limbs. “Life is forever going to be different,” she said. “But different doesn’t necessarily have to be bad. It’s just going to be what we make it, and we just have to figure it out, figure it out for our kids. Dad’s going to have cool hands, Dad’s going to have cool feet. We want to be positive.”

A GoFundMe page has been put up to help Breen with his medical expenses.