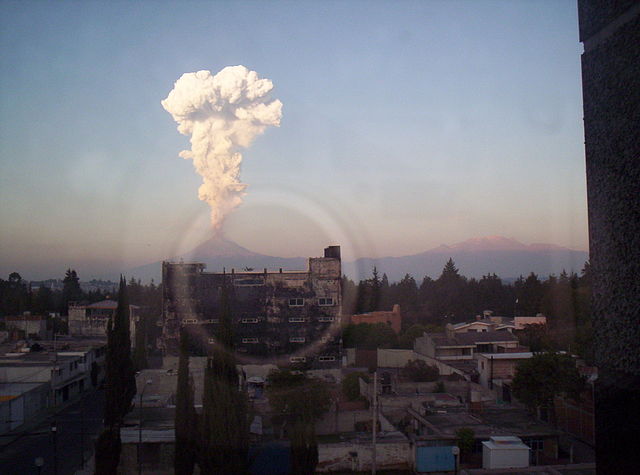 Residents near the Popocatépetl volcano in Mexico were rather surprised to see the mountain spitting out a huge column of ash into the air. The ash exploded up to three miles above the volcano’s crater, local officials said.

The National Center for Disaster Prevention documented 324 outbursts in the last 24 hours. The volcano’s last recorded outbursts were in August, with four incidences, CNN reports.

Luis Felipe Puente, director of civil protection for Mexico, posted photos and videos on social media of the ash spreading through the sky, Fox 31 reports. Officials have warned people to stay away from the volcano, and that ash is likely to fall in nearby towns.

Scientists have noted that an increase in volcanic activity in Guatemala at Fuego and Santiaguito may be related to Popocatépetl’s most recent ash plume.

Popocatépetl erupted earlier this year, shooting out smoke, lava and ash. It is one of 1,500 potentially active volcanoes in the world – certainly the most active in Mexico, and the second highest peak in the country.

Located around 43 miles southeast of Mexico City in the states of Pebla and Morelos, the volcano had been dormant for years before its eruption in 1994. Since then, it has periodically rumbled, the volcanic activity a regular occurrence accepted by locals. There have been evacuations of nearby towns in the past decades since the volcano’s last major explosion.

The Popocatépetl volcano is also linked to the Iztaccihuatl volcano to the north via the Paso de Cortes. Until recently, it was one of three mountains in Mexico to contain glaciers, but these deceased in the 1990s due to warmer temperatures and increased volcanic activity.

The volcano’s name itself means “Smoking Mountain” in Nahuatl, and is referred to by Mexicans as “El Popo” or “Don Goyo,” after the legend of St. Gregory.

Activity is currently being monitored by the Deep Earth Carbon Degassing Project.