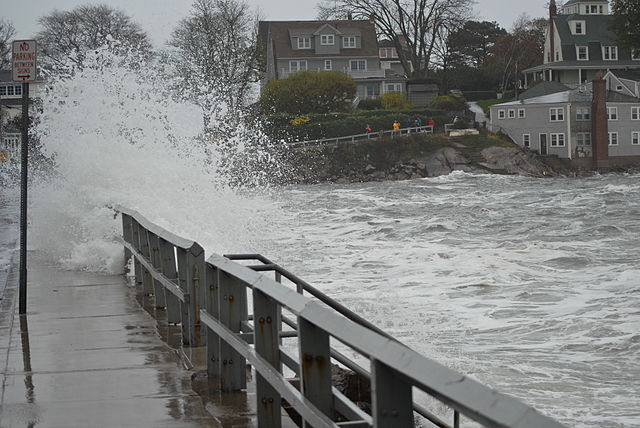 When Hurricane Sandy tore through New York in 2012, it left the city and surrounding areas devastated, with billions lost in damages. Now, a number of researches warn that floods of similar magnitude are rising in number and frequency so quickly that they could become the norm.

Scientists from Princeton University, Rutgers University and the Woods Hole Oceanographic Institution have created a computer simulation that predicts that storms and flooding will become more common in the coming years. The worst-case scenario was a frequency of 17 times more by 2100, according to Phys.org.

An analysis conducted on past storms and models predicting future ones shows that hurricanes and floods have become three times more frequent in the New York area since 1800.

The regularity is set to increase, from once every 400 years to once every 90 years, largely due to the rising sea levels.

The findings highlight how climate change, which the United States is already experiencing, is driving temperatures up that factor in how hurricanes occur.

Sandy was the second most expensive hurricane in US history, largely due to a high storm tide combined with a storm surge. Floods covered huge areas of New Jersey and New York City, pushing inland and causing the East River to overflow. Subway tunnels, streets and buildings were swamped, and the ciy reported 157 deaths in total.

Beyond the specific estimates on New York, the simulations can also predict what kind of storm floods might threaten coastal cities in the next century, providing a long-term flood risk assessment that includes factors caused by climate change.

Ning Lin, the lead author on the Princeton study and an assistant professor of civil and environmental engineering, says, “To effectively prepare for future hurricanes, we need to know what coastal cities will be facing in the coming decades, but past models have not accounted for all of the significant dynamic factors involved in predicting surge floods.” She adds, “You need numbers to plan, and this analysis puts sea-level rise and storm surge climatology together on a quantitative basis.”

There is some debate regarding the frequency of hurricanes and how they will play out in the next few years. Scientists say that not every storm as big as Sandy will bring about the level of flooding seen in 2012, as there are multiple factors to consider. But at the least, as researchers come up with more efficient models, predictions can become more accurate and in turn, bring on better preparedness and planning.

The studies were published in the Proceedings of the National Academy of Sciences.