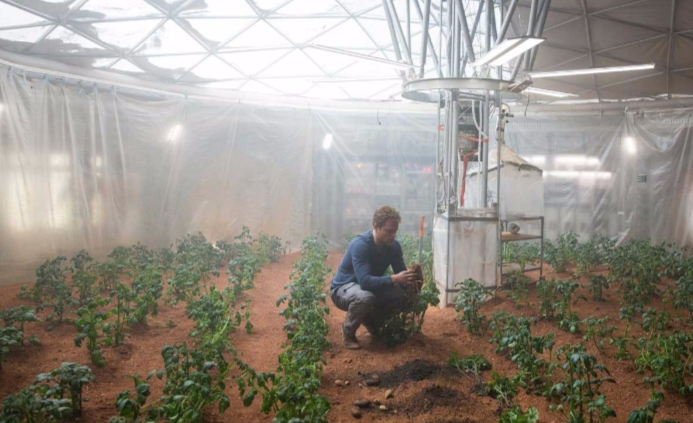 In the hit movie, The Martian, Matt Damon grows potatoes on the Red Planet using nothing more than his botany know-how and luck. And it looks this just might make science fiction a reality if scientists at the Buzz Aldrin Space Institute have anything to say about it.

Hidden away at the Florida Institute of Technology, a horticultural experiment is in the works, Phys.org reports.

The space institute’s goal is to get humans to Mars, and one of the main concerns is survival – in short, growing food on the cold, toxic planet.

Leafy garden rows are not in sight yet, as the garden is in its primary stages. A team led by Drew Palmer, an assistant professor of Biological Sciences, and Brooke Wheeler, an assistant professor at the College of Aeronautics, and composed of astrobiology majors, are trying to grow a particular variety of red romaine lettuce in various kinds of soil. These include earth, Martian surface material called regolith simulant, and regolith simulant with nutrients, as the scientists probe into the best formula necessary to make edible things grow in an otherwise inhospitable environment.

Andy Aldrin, director of the institute, said, “We have to get the regolith right, or anything we do won’t be valid.”
Regolith doesn’t contain any organic matter that would be helpful in plant cultivation and fewer minerals like nitrates and phosphates. Also, Martian soil in its pure form is dangerous to both plants and humans because of high chlorine content in the form of perchlorates.

The simulant the scientists use is not perfect, but until a real sample of dirt can be sent back to Earth, researchers will have to be content with creating the most accurate version they can using chemical sensing data from the Mars rovers.

It may eventually be possible for plants to grow on Mars by removing perchlorates and adding fertilizer. The Florida Tech team is working with NASA scientists who have successfully grown plants on the International Space Station to figure out how Martian farming can become a reality.

The work that the Florida scientists are doing frees NASA to focus on other Mars-related challenges, according to Trent Smith, the veggie project manager at the Kennedy Space Center. “With our academic partners working on planetary surface food production, NASA is able to focus on the near-term technologies and systems needed to get our crews to the Red Planet,” Smith said.

Palmer and Wheeler intend to expose their garden to more Martian factors, such as radiation exposure and root growth in weaker gravity, as well as the volume of water needed and water sources. These efforts are not only forward-looking to the possibility that humans may one day be able to inhabit Mars, but also help agriculture on this planet.

Daniel Batcheldor, project lead for the Buzz Aldrin Space Institute and a professor of physics and space sciences, said, “Thinking about ways to live on Mars is the ultimate test of sustainability. Learning to grow plants in an inhospitable environment like Mars could help us maximize food productivity and minimize the use of precious resources such as water and fertilizer back here on Earth.”