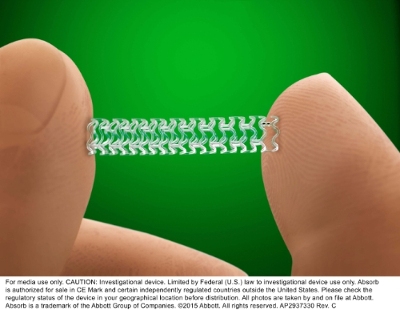 The use of a coronary stent that dissolves over time while in the body has been approved by the US Food and Drug Administration. This stent is a device that, like biodegradable stitches and absorbable bone screws, melts away when placed in patients who have cardiovascular diseases.

Healthcare company Abbott has won its FDA stamp with the Abbott Vascular’s Absorb GT1 Bioresorbable Vascular Scaffold System, the first coronary artery stent ever created for absorption by the human body and a bold leap in advanced medical technology.

Deepak Nath, senior vice president of Abbott’s vascular division, said in a statement that the Absorb device treats coronary diseases without patients having to commit to the more permanent metal stents that are traditionally used in the stenting procedure.

Stents are tiny mesh tubes placed in clogged arteries to widen and prop them open. Metal stents have been around for 40 years and, while effective, restrict movement and may narrow the field for other treatment options. According to the company, this new type of stent reabsorbs completely into the system in three years after implantation, once it’s done helping arteries in healing.  The expectation is that the artery can ten return to it’s natural curvature allowing it to constrict and dilate naturally.

Absorb is already being sold in over 100 countries worldwide, and has the potential to improve the body’s immune response by reducing the exposure to foreign substances, potentially helping in fighting heart diseases.

The scaffold of the stent is made from polylactic acid which is a type of polymer.  The device performed on the same level as a drug-coated metallic stent, also from Abbott, called Xience in a human clinical trial involving some 2,000 patients. However, the trials also found a lightly higher rate of blood clotting, or thrombosis, in patients who had received Absorb – a fact that has made some cardiologists hesitant.

But an FDA advisory panel endorsed the stent by a majority in March, paving the way for approval. Dr. John Somberg of Rush University Medical Center in Chicago, who was on the panel and voted for Absorb, noted that the benefits of the device outweighed the risks by far. He said that the panel believed Absorb “could be a game-changer in terms of technology.”

In addition, Somberg said that patients who have metal stents have to constantly medicate to prevent blood clotting; with Absorb, the hope is that these drugs will be unnecessary in the long run.

Coronary heart disease kills over 370,000 Americans each year, according to the National Heart, Lung and Blood Institute. Coronary stents are only used on some 850,000 patients annually in the United States.

Abbott has not releases a price for the absorbable stents, but did say that these will be “only modestly higher” than their metal stents.