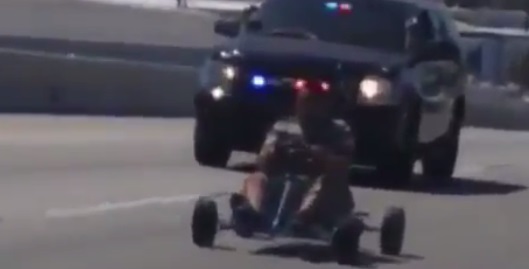 Motorists were taken by surprise Sunday as an odd police chase took place on a California freeway, showing a man in a go-kart zipping down the highway while an unmarked police vehicle was chasing after it.

The bizarre incident was caught on video by a Snapchat user then posted to twitter by user @Tonka_Boy_Dre, which shows the man at the wheel of the go-kart going down Interstate 880 in Oakland, California as police gave chase, reports ABC News. Witnesses, including passing motorists, cheered the go-kart driver on.

“Local guys have an annual go kart and dirt bike ride throughout Oakland and sometimes jump on the freeway,” @Tonka_Boy_Dre tweeted, adding that the man’s companions had managed to slip past officers. “This particular person on the go-kart was the slowest and the last in the pack,” said another tweet. “That’s why he was being chased by police.”

Tonka Dre took and uploaded another 10-second clip showing that the go-kart is mostly open.

The California Highway Patrol said they had no idea who was chasing the go-kart, and that they had nothing to do with it. Go-karts are illegal on all interstate freeways.