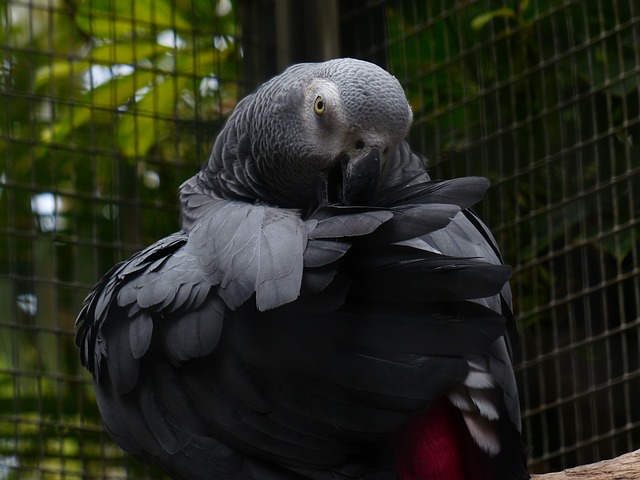 New police information show that a woman is now a suspect in her husband’s murder in Sand Lake, Michigan, and a parrot may have been witness to the dead man’s last words.

An African grey parrot is said to have hear Martin Durham’s final plea to his shooter before he was killed by five bullets. The bird, named Bud, was apparently heard reciting, “Don’t f—— shoot” in a video taken by family members a few weeks after Durham died, Wood TV reports.

That bird picks up everything and anything, and it’s got the filthiest mouth around.

Charles Dunham, Martin’s father, said, “I personally think he was there and he remembers it and he was saying it.” Both Charles and Lillian claim the parrot was mimicking both Durham and his wife, changing voices in the video as if arguing.

It’s uncertain if authorities have seen the said video, or if the parrot’s utterances are even admissible in court as evidence.

Durham, 45, was shot and killed inside his home on 128th Street in Ensley Township in what police initially thought was a double-homicide. His wife, Glenna Dunham, was found lying next to him with a gunshot wound to her head, but officials realized she was still alive.

Police reports say that Durham’s wife, Glenna Durham, has now been named a suspect in the investigation. She has recovered from her injuries and denies the accusations.

“I know for a fact I didn’t kill my husband,” Glenna has told the police. Investigators are looking into a murder-suicide plot gone wrong, as Glenna is alleged to have written three suicide notes. The couple had been having financial problems and one of the suicide notes supposedly left for one of the Durham’s children, apologized for being “a disappointment to you these last 12 yrs or so,” and asks, “Please forgive me.”

Newaygo County Prosecutor Robert Springstead said that there is some evidence that might support the police theory.

The case is still under investigation by the Michigan State Police and the prosecutor is expected to decide whether or not to file charges against Glenna Durham.