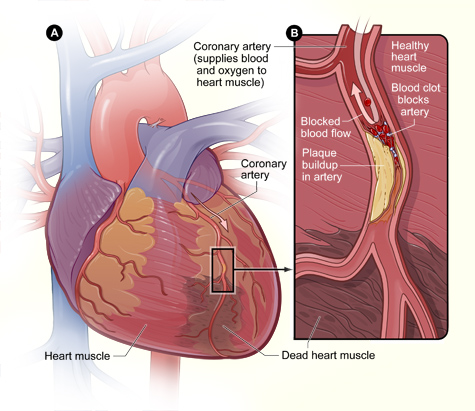 As many as 50% of all heart attacks may be “silent” – unaccompanied by the usual massive chest pain, shortness of breath and cold sweats.  This was the conclusion reached by a new study that surveyed 9,500 Americans.

The study, published in the journal Circulation,  found that 45 percent of all heart attacks were silent with the authors also concluding that these silent attacks triple the odds of dying from heart related diseases.

According to US NEWS, Dr. Elsayed Soliman is one of the study authors who is quoted as saying that:

Dr. Soliman is the director of the epidemiological cardiology research center at Wake Forest School of Medicine in Winston-Salem, N.C.

For many users the silent heart attack are accompanied by symptoms that are so mild most patients barely notice them.  The only way they are discovered is via an EKG during a routine regular exam or other medical procedure.

When heart attacks are silent, people are less likely to get treatment. And that’s been a problem with women. Symptoms are sometimes more subtle than the crushing chest pain.

Dr. Steinbaum, who is not related to the study, suggested that this is a big problem for women.  She urged people to not dismiss symptoms such as nausea, shortness of breath and fatigue, especially when they occur during normal exercise or every day activities. If these symptoms go away while resting then it is better to see a doctor rather than take a chance.

Dr. Soliman said that once a silent heart attack is discovered, patients need to be treated aggressively. Treatment options include drugs for controlling high blood pressure and cholesterol  as well as lifestyle changes and modifications to behavior.

Lifestyle changes include all the usual elements for healthy living including nutrition, losing weight, exercising and ceasing smoking.

The basic parameters of the study were:

The study concluded that the risk of death is 34 percent higher after a silent heart-attack.

US NEWS reported that the director of clinical cardiology at National Jewish Health in Denver, Dr. Andrew Freeman, commented on the results by suggesting that doctors needed to put more time and effort into prevention.

Dr. Freeman is one of the spokespersons for the American College of Cardiology.