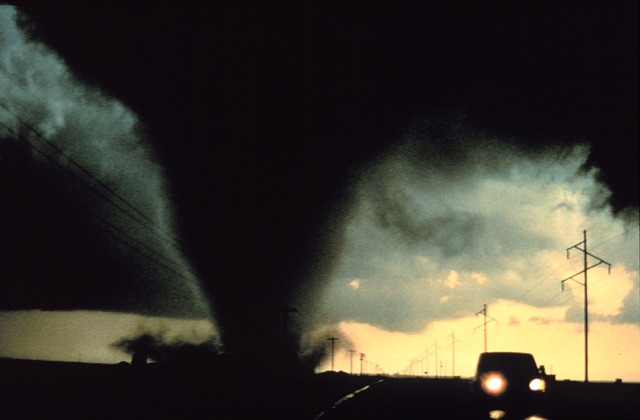 A violent storm system that tore into Oklahoma and killed at least two people, generating over 20 possible tornadoes as it raged, has swept into Arkansas.

Steven Sosna from NBC News reported that, “Heavy [thunderstorms] this morning are moving across Arkansas with a few tornado warnings.”

A storm overturned and destroyed at least one airplane at the Salem Airport in Arkansas.

An elderly man was one of the people hit and killed when storms lashed at South-Central Oklahoma on Monday, authorities confirmed.

The man, who has yet to be identified, died when a big, swift tornado hit Garvin County, according to Bud Ramming, Garvin County’s emergency management director. The same tornado damaged some structures, overturned vehicles and felled trees.

The tornado, described as “large and extremely dangerous” also trapped six peoples under a pile of debris south of Wynnewood, also in Garvin County, the National Weather Service stated.

Multiple homes were reported to have been destroyed between Interstate 35 and Elmore City.

Another person died in the Connorville-Bromide area due to the storm, according to the Johnston County Sheriff’s Office.

This tornado was one of several resulting from the storm system that the National Oceanic and Atmospheric Administration’s Storm Prediction Center warned would spin off more tornadoes from eastern Oklahoma to central Arkansas, with wind speeds of over 100 mph.

Tornadoes were likewise reported near Oklahoma City, southeastern Lincoln, Nebraska, and near Odessa. One of these tornadoes spewed up a cloud of debris over a mile wide. Large hail accompanied the tornadoes in Nebraska, some up to four and a half inches in diameter. Similar hail was forecast from eastern Texas to southeastern Kansas.

These weather disturbances are all coming from a single giant storm system that was also responsible for tornadoes and hailstorms in Kansas, Oklahoma and Colorado over the weekend. At least five people were injured and some structures were damaged when a tornado swept into Wray, Colorado last Saturday.