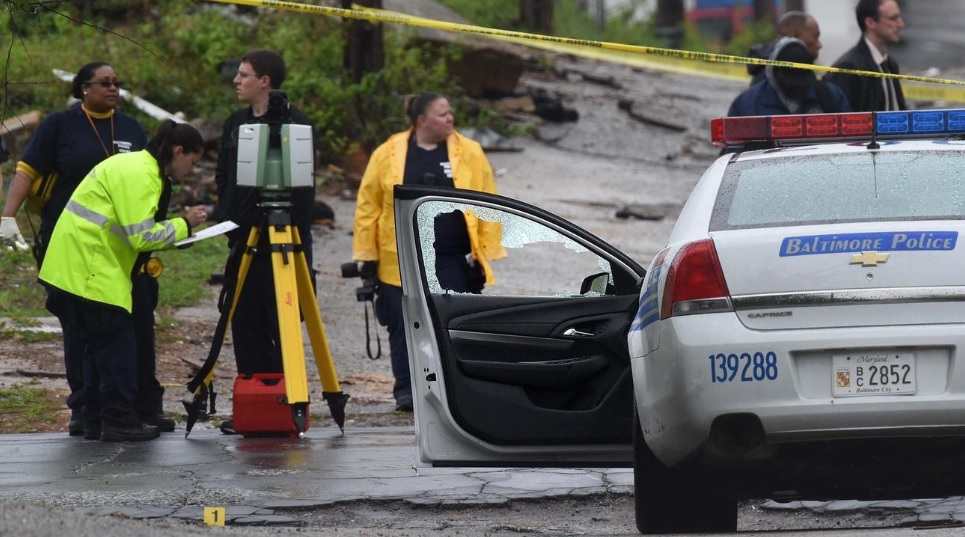 Police confirmed that a Baltimore officer sitting in his patrol car shot and wounded a man who came up and pointed a 9mm gun at him at 9:30 a.m. Sunday, reports The Baltimore Sun.

Police Commissioner Kevin Davis said that the man, “Had every intention of provoking this police-involved shooting and it appears to be a suicide by cop scenario.” When other police officers and emergency personnel arrived on the scene, Davis says the suspect kept repeating, “He should have finished me off.”

According to Davis, the police officer “perceived he was being ambushed.” Police officers reported that the cop, who is yet unidentified, was sitting in his car in an alley off Ulman Avenue, writing up reports. When he saw the man pointing the gun at him, the officer fired through his closed car window, breaking the glass and hitting the armed man several times.

“The fact that the weapon wasn’t loaded does not change the threat that was perceived by the officer, who had a raised gun at him,” TJ Smith of the Baltimore City police told CBS Baltimore.

The suspect, who has not been identified, was conscious when taken to the hospital, but was critically wounded. His gun turned out to be unloaded.

“I’m just in shock that someone would have a gun and do that, and early on a Sunday morning,” City Councilwoman Sharon Green Middleton said.

It’s another example of the problems we have with guns and how easy it is to obtain a gun on the street.

“I continue to pray for our officers that put their jobs on the line every day, and I pray for the family of this person that did this particular act.” Middleton represents Park Heights, the area where the shooting occurred.

Police representative Donny Moses said that charges are pending against the suspect. Police are still trying to identify him, as he carried no identification documents with him. The officer was not injured in the incident.

This shooting is the third in five days involving police officers from Baltimore. A teenage boy suspected to be carrying an automatic pistol was shot Wednesday when he ran from officers. The teenager turned out to be carrying a BB gun. On Thursday, a 25-year old man suspected of carrying a bomb outside a local television station was likewise shot. He was carrying chocolate bars and wire. Both man and boy were hospitalized, but are in stable conditions.

The suspected bomber, Alex Brizzi, is facing several charges, as his car burned outside the station after which he entered the lobby and gave a flash drive to a security guard, then refused to follow police orders to remove his hand from his pocket.

The area where the shooting happened has had constant problems with drugs and other shooting incidents, but Middleton said that, “Park Heights has its problems, but it’s wonderful people there that still have hope and care about their community.”