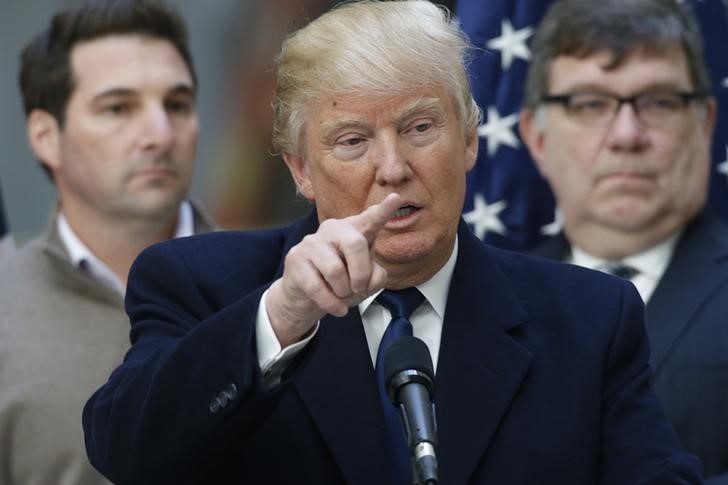 Republican U.S. presidential candidate Donald Trump speaks to the media during a news conference at the construction site of the Trump International Hotel at the Old Post Office Building in Washington, March 21, 2016. REUTERS/Jim Bourg

WASHINGTON (Reuters) – U.S. Republican presidential front-runner Donald Trump on Sunday doubled down on his criticism of NATO, a cornerstone of U.S. foreign policy for decades, and called for the alliance’s overhaul days before world leaders convene in Washington.

President Barack Obama will host the Nuclear Security Summit on Thursday and Friday with 56 delegations in attendance. While preventing nuclear terrorism will headline the discussions, Trump’s views could be a topic as well, particularly behind the scenes.

In another sharp departure from historic U.S. policy, Trump said in an interview published on Sunday by The New York Times that he would consider letting Japan and South Korea build their own nuclear weapons, rather than rely on America for protection against North Korea and China.

The billionaire businessman, vying to win his party’s nomination for the Nov. 8 presidential election, also said he might halt U.S. purchases of oil from Saudi Arabia and other Arab allies unless they commit ground troops to fight Islamic State or pay the United States to do so.

“NATO is obsolete,” Trump said on ABC’s This Week with George Stephanopoulos.

The 28-country North Atlantic Treaty Organization was set up in a different era, Trump said, when the main threat to the West was the Soviet Union. It was ill-suited to fighting terrorism and cost the United States too much, he added.

“We should readjust NATO … it can be trimmed up and it can be, uh, it can be reconfigured and you can call it NATO, but it’s going to be changed,” he said.

On March 21, Trump said the United States should slash its financial support for NATO, which was formed in 1949 after World War Two and became a bulwark against Soviet expansionism.

Russia will not attend the upcoming nuclear summit, but Chinese President Xi Jinping will.

Obama said the United States would review international efforts to combat Islamic State in the wake of the Brussels attacks.

“Abandoning Europe, withdrawing from the most successful military alliance of modern times, it makes no sense at all,” Cruz said. “It would hand a massive victory to (Russian President Vladimir) Putin, a massive victory to ISIS,” the militant group also known as Islamic State.

Cruz said if he were elected president, his approach to Islamic State would be to “carpet bomb them into oblivion.”

In the interview, Trump also said he would be willing to withdraw U.S. troops from Japan and South Korea unless the two countries paid more to house and feed them. Japan hosts about 50,000 U.S. troops, while 28,500 are in South Korea.

Japanese Chief Cabinet Secretary Yoshihide Suga told a news conference in Tokyo on Monday that there had been “no change” to Japan’s policy of not building, possessing or introducing nuclear weapons, and reiterated that no matter who became U.S. president, the U.S.-Japan alliance would remain the core of Japan’s diplomacy and vital for regional and world stability.

South Korea said it had continued to play a positive role in the U.S. military’s presence in the country and for the allies’ ability to defend against the North and there was no change to its commitment to the mutual defense treaty establishing their military partnership.