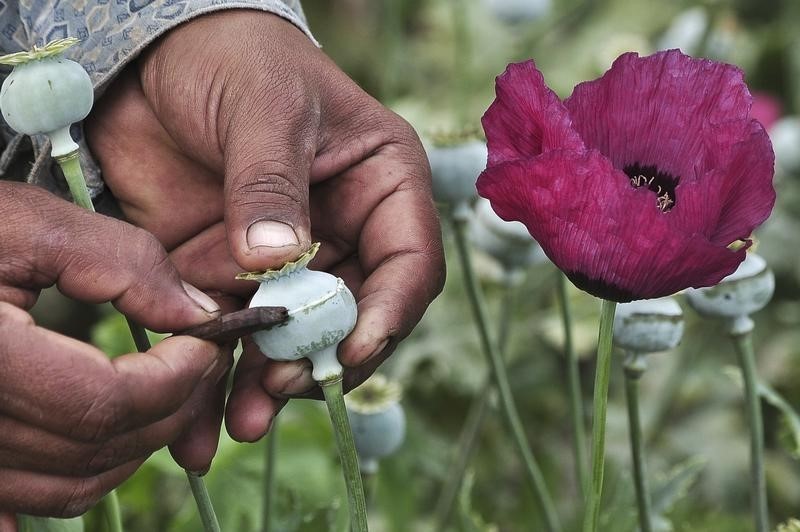 A man lances a poppy bulb to extract the sap, which will be used to make opium, at a field in the municipality of Heliodoro Castillo, in the mountain region of the state of Guerrero January 3, 2015. REUTERS/Claudio Vargas
Share
Tweet
Share
Share
Email
Comments

MEXICO CITY (Reuters) – A senior Mexican official has said legalizing cultivation of opium poppies for medicinal purposes might help reduce violence in one of the regions most affected by brutal drug gangs that have ravaged the country for years.

Hector Astudillo, governor of Guerrero, one of the most violent states in Mexico, told Milenio television it was worth at least exploring the possibility of allowing cultivation.

“Let’s do some sort of pilot scheme,” Astudillo, a member of President Enrique Pena Nieto’s Institutional Revolutionary Party, told Milenio in an interview recorded last week but broadcast on Monday.

“Provided it’s used for medical issues … It’s a way out that could get us away from the violence there has been in Guerrero,” he added.

Home to the beach resort Acapulco, Guerrero was the scene of the September 2014 disappearance of 43 trainee teachers, who the government says it believes were massacred by a drug gang working with corrupt local officials and police.

The disappearances sparked widespread international condemnation of the state of law and order in Mexico.

Astudillo, who was elected governor of the southwestern state last year, said Guerrero could not tackle the violence on its own, and argued bringing poppy cultivation into the open could weaken the hold gangsters have on local farmers.

He did not offer details of how such a scheme could work in Mexico, which is currently conducting a national review of its policy on marijuana after the Supreme Court last year granted an advocacy group the right to grow it for recreational use.

Though the marijuana ruling only applied to the group in question, it could eventually usher in nationwide changes.

Still, President Pena Nieto has been very cautious about the possibility of liberalizing Mexico’s drug laws.

Opium poppies are used to make opium and heroin, as well as morphine and other pain-killing drugs. They can only be grown legally in a handful of countries, including India, Turkey and Australia.

More than 100,000 people have died in Mexico due to clashes between drug gangs and the state since the previous government sent in the armed forces to fight the cartels in late 2006.