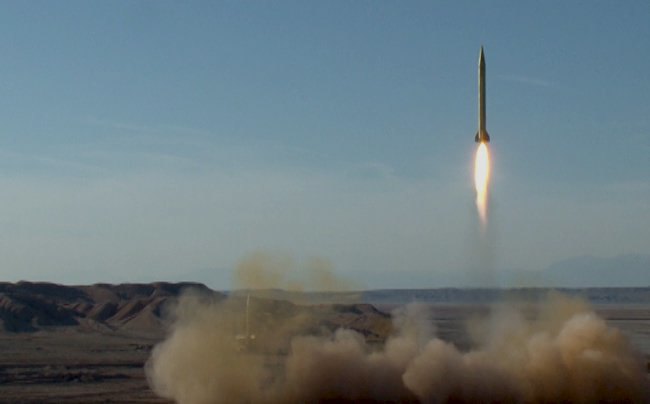 A ballistic missile is launched and tested in an undisclosed location, Iran, in this handout photo released by the official website of Islamic Revolutionary Guard Corps (IRGC) on March 8, 2016. REUTERS/sepahnews.com/Handout via Reuters

By Sam Wilkin and Bozorgmehr Sharafedin

State television showed footage of two Qadr missiles being launched from northern Iran which the IRGC said hit targets 1,400 km (870 miles) away. Tests on Tuesday drew a threat of new sanctions from the United States.

“The reason we designed our missiles with a range of 2,000 km is to be able to hit our enemy the Zionist regime from a safe distance,” Brigadier General Amir Ali Hajizadeh was quoted as saying by the ISNA agency. The nearest point in Iran is around 1,000 km (621 miles) from Tel Aviv and Jerusalem.

The Obama administration is aware of the latest tests, U.S. officials said. “Just as with the earlier reported test launches, we will look at these and take the appropriate response, both at the U.N. and unilaterally as appropriate,” said a senior administration official who did not want to be named.

Iranian agencies said the missiles tested on Wednesday were stamped with the words “Israel should be wiped from the pages of history” in Hebrew, though the inscription could not be seen on any photographs.

“To my regret there are some in the West who are misled by the honeyed words of part of the Iranian leadership while the other part continues to procure equipment and weaponry, to arm terrorist groups,” Yaalon said.

The IRGC maintains dozens of short and medium-range ballistic missiles, the largest stock in the Middle East. It says they are solely for defensive use with conventional, non-nuclear warheads.

Tehran has denied U.S. accusations of acting “provocatively”, citing the long history of U.S. interventions in the Middle East and its own right to self-defense.

The United States said it would raise Tuesday’s tests at the U.N. Security Council, where resolution 2231 calls on the Islamic Republic not to develop missiles capable of carrying nuclear warheads.

Washington also imposed sanctions against businesses and individuals in January over another missile test in October 2015. But the IRGC said it would not bow to pressure.

“The more sanctions and pressure our enemies apply… the more we will develop our missile program,” Hajizadeh said on state television.

The missile test underlined a rift in Iran between hardline factions opposed to normalizing relations with the West, and Rouhani’s relatively moderate government which is trying to attract foreign investment to Iran.

Rouhani’s popularity has soared since the nuclear deal in January, under which Tehran won relief from international sanctions in exchange for limiting its nuclear research. The president’s allies made strong gains in recent elections to parliament and the body that will elect the next supreme leader.

Foreign business delegations have since flocked to Tehran, but hardliners including senior IRGC commanders have warned that economic ties could strengthen Western influence and threaten the Islamic Republic.

Some criticized a $27 billion deal between the government and Airbus to add 118 planes to its aging civilian fleet, saying the money should be used to create jobs locally.

The Tasnim agency, which is close to the Guards, carried a photograph of reporters in front of the missile before launch. It quoted an IRGC officer as saying: “Some take photos with the French Airbus, but we take photos with native Iranian products”.

Washington said Tuesday’s missile tests would not themselves violate the Iran nuclear deal.