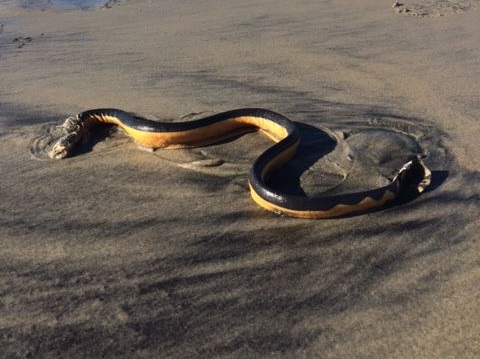 This venomous sea snake known as a yellow-bellied sea snake recently washed ashore in Southern California and it’s not the first time in recent months that the rare snake has made an appearance on the shores of California.

A venomous water snake usually found in tropical waters has washed ashore in the Southern California city of Coronado, a resort city referred to by some as Coronado Island.

The reptile–identified by local snake experts as a rare yellow-bellied sea snake–is not the first of its species to have washed ashore in California in recent months.

According to a news advisory from the city of Coronado, the appearance of yet another yellow-bellied sea snake is “a sign of warming ocean temperatures and El Niño conditions.”

While the venom of yellow-bellied sea snakes is highly potent, no human deaths attributed to their venomous bite have ever been reported.

The 20-inch-long snake was discovered at approximately 2:30 p.m. (PT) on Tuesday after a citizen alerted local lifeguards to its presence.

The snake, which was discovered on Dog Beach, was “barely alive” by the time the lifeguards had been alerted to its presence.

Not long after the lifeguards managed to secure the 20-inch snake–which the Los Angeles Times reports to be the third to have washed up on the shores of California in recent months–it died.

Coronado is handing the snake over to the Scripps Institution of Oceanography, as directed by officials with the California Department of Fish and Game.

Last month, in December, a short-nosed sea snake that was believed to have gone extinct was spotted for the first time in over 15 years. It was spotted by a park ranger in Australia who caught a glimpse of not only one, but two of the rare snakes that are known formally as Aipysurus apraefrontalis.