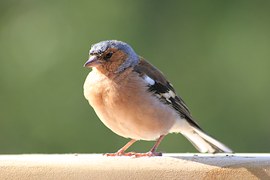 Finches found on the Galapagos Islands made famous by Charles Darwin’s research on the theory of evolution have seen a worrisome reduction in their population due to parasitic flies.

In the 1830s, when Charles Darwin was working on his theory, he noticed that there were differences in the beaks of finches found on various islands in the Galapagos. The beaks were different depending on the local food they ate. Darwin concluded that the different variations were of the same base finch that had evolved to adapt to its food source.

According to BBC, there are between 14 and 18 different species variations of the finch on the Galapagos Islands. The recent study looked specifically at the medium ground finch, the most common variety with a population of about 270,000 on the island of Santa Cruz.

The Huffington Post reports that the recent research was published in the Journal of Applied Ecology and the lead author of the study is Professor Dale Clayton from the University of Utah. In the article, it is explained how the parasitic flies causing all the trouble are laying their eggs in the nests of the finches and subsequently attacking the fragile baby birds.

The flies aren’t indigenous to the Galapagos and were brought there in the 1960s. There are options available to help save the finches. One solution is to bring a particular species of wasp that will lay their eggs in the fly larvae and kill them. Another idea is to use cotton balls treated with pesticides. Prof. Clayton explained that the birds can take the cotton, bring it back to their nest and be free of the pests.

The birds will travel up to 60 feet or so and pull the cotton out and line their nests. If they get at least a gram of that fumigated cotton in their nests, you kill 100% of the flies.

Another possibility is that the finches themselves may evolve to protect themselves from the flies. The young could develop warning cries or the parents could be at the nest more to protect and help the young.

It is unknown, however, if these changes would occur in time to save the species.