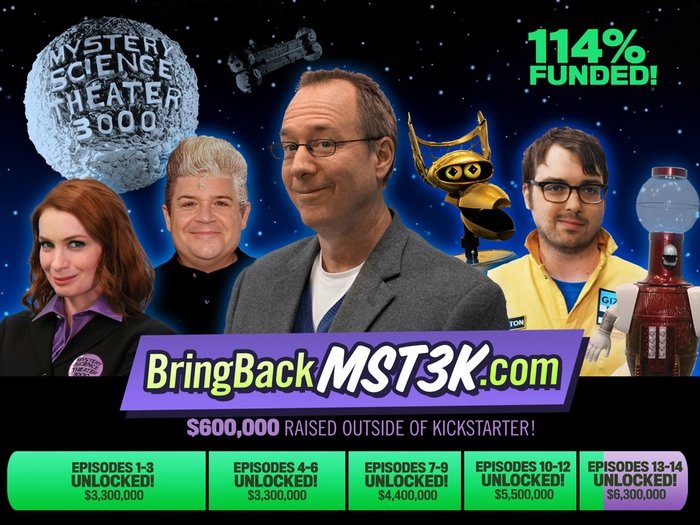 The American television series Mystery Science Theater 3000 is getting rebooted and the Kickstarter campaign to make it happen set a crowdfunding record on Friday as it became the most crowdfunded video project in the history of the Internet.

In 2014, Veronica Mars set the record on Kickstarter when it raised over $5.7 million – a number that MST3K has managed to exceed by a matter of tens of thousands of dollars.

The campaign to reboot the series, which entails a host and a bunch of captive robots commenting on movies, wrapped up on December 11.

As a result of the successful crowdfunding campaign — which was created by the show’s original host, Joel Hodgson — Mystery Science Theater is coming back in the form of 14 new episodes, which include a holiday special.

At $3.3 million, investors unlocked the first six episodes and once funding reached $4.4 million, the next three were unlocked. At $5.5 million, episodes 10-12 were unlocked. The final campaign goal, $6 million, was achieved and then some as the reboot managed to raise a total of $6.3 million with the help of some funds raised outside of Kickstarter.

In achieving the final campaign goal, backers unlocked a total of 14 episodes.

The campaign, now 114 percent funded, is scheduled to begin shooting in 2016.

In other news, Netflix is rebooting the Lost In Space TV series.

Are you excited for MST3K‘s now imminent reboot?