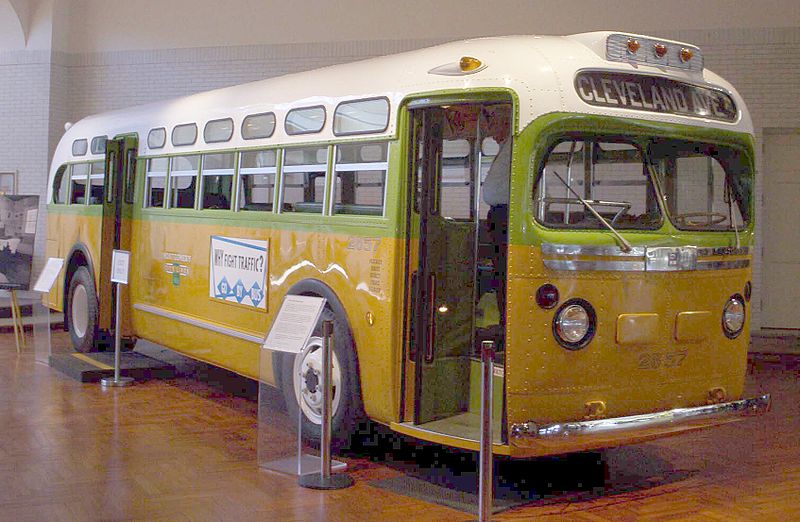 President Barack Obama and Democratic Party front-runner Hillary Clinton both paid tribute to Rosa Parks on Tuesday, honoring the sixtieth anniversary of her act of civil disobedience on a Montgomery, Alabama bus that led to a boycott of the bus system and the eventual collapse of Jim Crow.

“Like so many giants of her age, Rosa Parks is no longer with us. But her lifetime of activism – and her singular moment of courage – continue to inspire us today,” said Obama, according to Time. Obama also applauded the decision of African-Americans to boycott the bus system as an act of protest. “Because they marched,” he said, “our union is more perfect.”

Like so many giants of her age, Rosa Parks is no longer with us. But her lifetime of activism – and her singular moment of courage – continue to inspire us today. Refusing to give up a seat on a segregated bus was the simplest of gestures, but her grace, dignity, and refusal to tolerate injustice helped spark a Civil Rights Movement that spread across America.

Hillary Clinton took it upon herself to venture to Montgomery, Alabama on the anniversary of the historic day to build support among the African-American demographic. In a Newsweek piece, Clinton was said to have made a call for an end to mass incarceration, which negatively affects African-Americans disproportionately in the U.S. Clinton said, “Right now, an estimated 1.5 million black men are missing from their families and communities because of incarceration and premature death.”

In 2008, Clinton was expected to supersede Obama and become the Democratic Party’s presidential nominee, but African-Americans, including those in southern states such as Alabama, gave broad support to Obama. During this campaign cycle, Clinton has relied on race and gender rhetoric more heavily, calling out the GOP for sexism and even meeting with Black Lives Matter organizers. She is also playing the gender card hard, emphasizing that the time for a female head of state is now.

When Rosa Parks famously refused to move to the back of the bus on December 1, 1955, she may not have known she was breaking so much of the cultural and political foundation of the United States that both female and African-American individuals would be serious contenders for the presidency less than a century later.