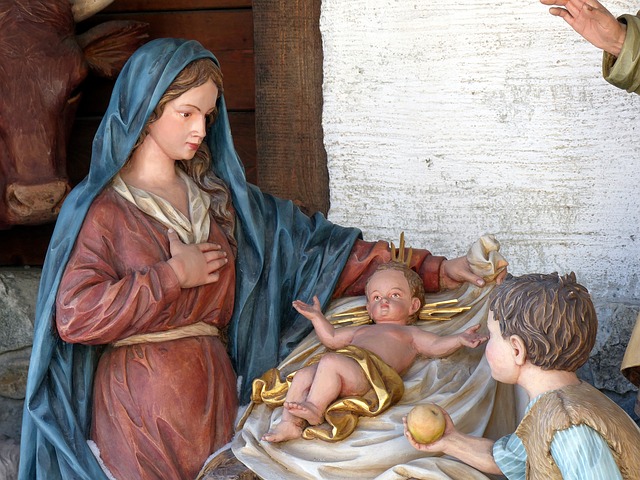 A nativity scene display in a Queens, New York church held a surprise on Monday. Swaddled up in purple towels inside the manger was a baby boy, with his umbilical cord still attached.

The baby was found in the Holy Child Jesus Church by custodian Jose Moran. He has been working at the church for three years. He went on his lunch break and returned at around 1 p.m., unaware of what was waiting to be found a few feet away.

“I was in the church sweeping, then I hear a child crying. I didn’t make much of it. I thought there was somebody in the church with a child,” he explains.

He went back to sweeping and thought no more of it. Until he started to realize the situation.

I looked around and didn’t see anyone. That got me curious. I followed the cries. I walked to the little nativity home we had installed inside the church … I couldn’t believe my eyes. The baby was wrapped in towels. He still had his umbilical cord. He was next to the Virgin (Mary).

According to Reverend Christopher Heanue, the church is “considered a safe haven for dropoffs.” The healthy baby was sent to Jamaica Hospital for care.

Surveillance video of the church shows a woman come in with a baby and leave without it. People have been quick to offer to adopt the mysterious church infant.

“There are families within the parish who have inquired as to adopting the baby already,” said Reverend Heanue. “They feel that he was left in the parish and should stay in the parish.”

Moran stated that workers had finished putting up the display about an hour before he found the baby.

“At least whoever abandoned him brought him to a safe place and didn’t leave him to die,” he said.

Brooklyn-Queens Diocese spokeswoman Rocio Fidalgo stated that,“We can’t imagine the desperation she must have gone through, but placing the baby in the manger where Jesus is born … she wanted him to be close to Christ. We may never meet her, but our prayers are with her.”

Though churches are considered safe havens where unwanted infants can be left, the unknown mother may face charges because she did not tell anyone that she left her baby in the manger.

In an update to this story, The Telegraph reports that the mother of the young infant will not face criminal charges, according to prosecutors.