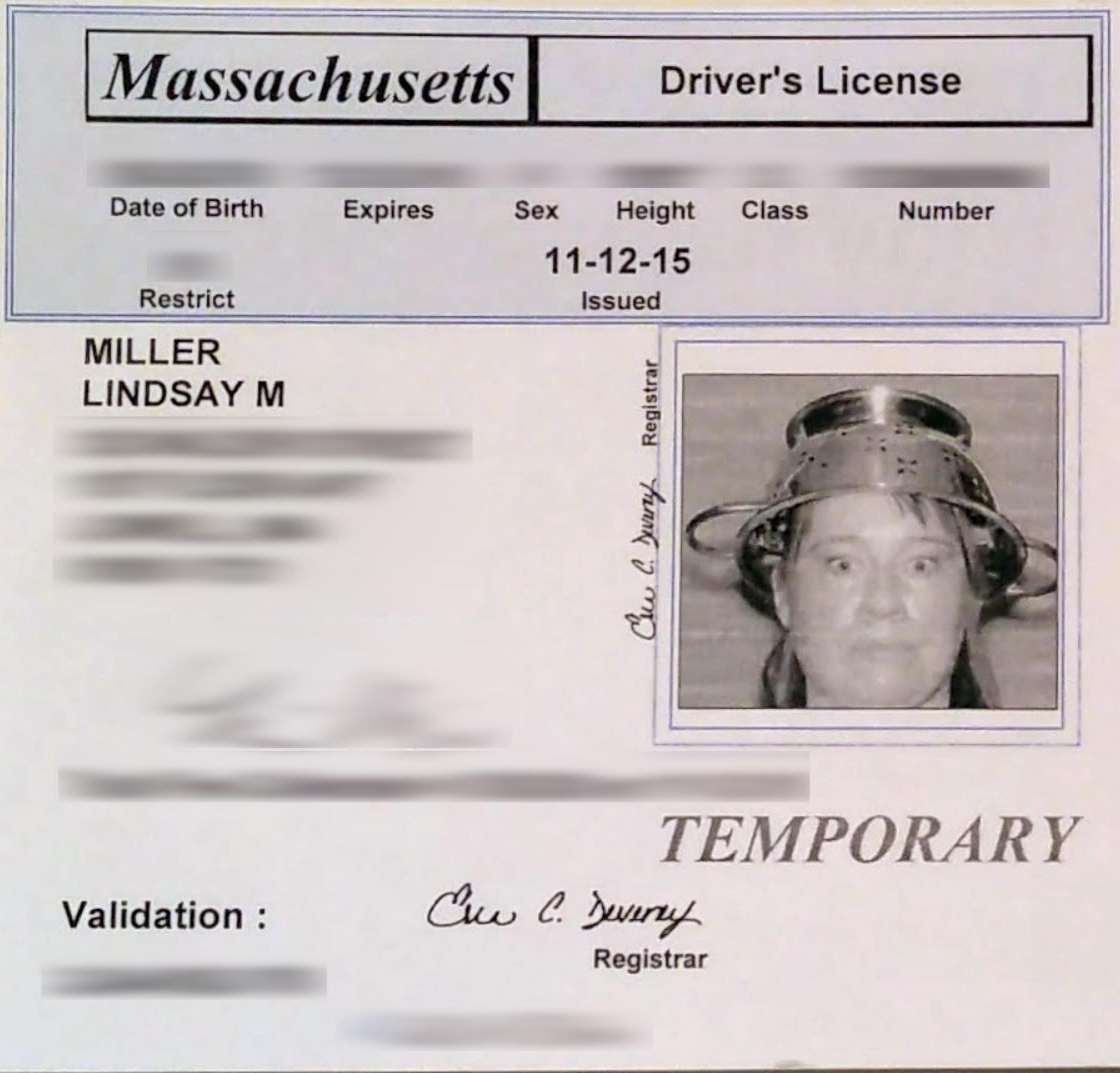 A woman in Massachusetts who identifies herself as a follower of a religion that teaches the possibility of an airborne “spaghetti monster” having created the universe, Pastafarianism, has won the right to wear a colander on her head in her state issued driver’s license photo.

The Lowell resident, Lindsay Miller, claims that the spaghetti strainer she adorned her head with is a sign of her religious devotion, which, being as she’s a self-proclaimed Pastafarian, is to the Church of the Flying Spaghetti Monster, the Boston Globe reported.

While Miller was previously denied her license renewal by the Massachusetts Registry of Motor Vehicles (RMV) in light of her inclination to wear a spaghetti strainer on her head, she filed for an appeal based on the grounds that “religious reasons” are exempt from the RMV’s rule which otherwise bans the wearing of hats and head covers in photos.

In regards to the August incident in which Miller was denied a license renewal, she claims that the RMV employees “were kind of laughing” at her and that she “thought of other religions and women and thought that” what was happening “was not fair.”

They were kind of laughing at me (…) I thought of other religions and women and thought that this was not fair. I thought, ‘Just because you haven’t heard of this belief system, (the RMV) should not be denying me a license.’

The religion to which Miller claims to belong has been referred to as a parody religion by some critics, The Washington Times reports.

The RMV’s recent decision to reverse its stance regarding the Massachusetts woman’s religious right to wear a spaghetti strainer on her head in her photo come on the heels of an intervention by the American Humanist Association’s Appignani Humanist Legal Center.

Ms. Miller was quoted by the Times as having said that while she doesn’t “think the government can involve itself in matters of religion,” she does “hope” that the RMV’s recent reversal encourages her “fellow Pastafarian Atheists to come out and express themselves” as she has.

While I don’t think the government can involve itself in matters of religion, I do hope this decision encourages my fellow Pastafarian Atheists to come out and express themselves as I have

In other religious coverage here at Immortal News, we recently reported on the rise of atheism in America — which, according to the Pew Research Center, is rising by not one, but several measures.