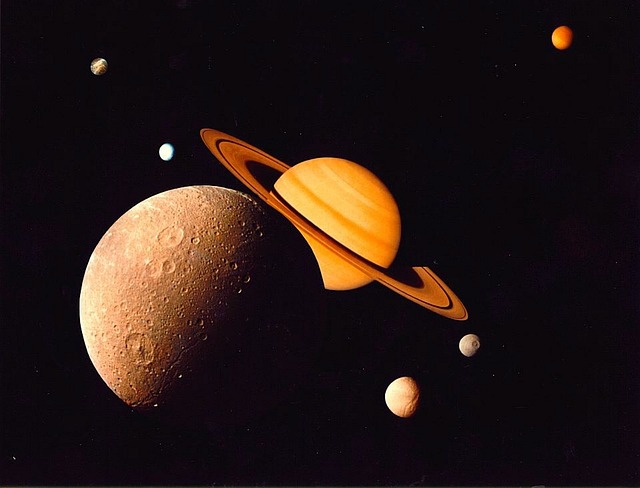 A massive storm is brewing on Titan, Saturn’s largest moon, and the Cassini probe is giving humanity a front row seat. The probe, which has been at Titan since 2004, is equipped with a Composite Infrared Spectrometer (CIRS) which can see infrared wavelengths invisible to the human eye. It has also allowed Cassini to see the onset of spring and summer at the moon’s north pole, as well as see the fall — and now the onset of winter — at the south pole. While Titan may not have some of the same celebrity as its neighbors,  NASA scientists are very excited.

According to the Daily Mail, the gigantic clouds that are forming the storm are ice clouds peaking at an altitude of about 124 miles, and are about 150 miles long. These clouds are somewhat like earth’s fog, in that they have a heavier density than the rest of the atmosphere, and it is supposed that they have a flat top. However, their formation is quite different.

When we looked at the infrared data, this ice cloud stood out like nothing we’ve ever seen before … it practically smacked us in the face.

In Earth’s clouds or fog, water evaporates into the air and rises until temperature and density of air cause precipitation. However, in the case of Titan, clouds are formed when warm gases from the warm pole flow towards the cold pole. Business Standard reports that, as they move and the air gets colder, different gases freeze at different temperatures, thus creating the layered clouds Cassini has observed.

The cloud came as a surprise to the NASA scientists overseeing the mission. Carrie Anderson, from NASA’s Goddard Spaceflight Center, was quoted as saying “when we looked at the infrared data, this ice cloud stood out like nothing we’ve ever seen before … it practically smacked us in the face.”

The Cassini mission ends in 2017, at which point the south pole will still be enveloped in a bitter winter. This gives the scientists at NASA a limited time in which to perform further research.