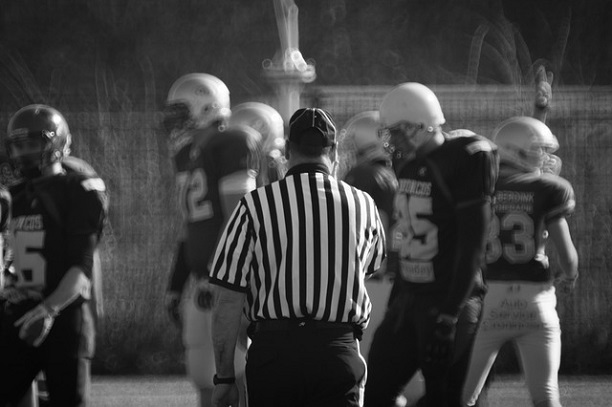 Anthony Smith, the former defensive end for the Oakland Raiders, was found guilty on Thursday of the murders of three men, two of whom appeared to have been branded on the face by a hot iron.  The 48-year old was charged with the murders of four men killed between 1999 and 2008.  The fourth charge against Smith was thrown out as a mistrial.

The charges were for the 1999 shooting of two brothers and the stabbing of another man in 2001.  All three men were kidnapped and tortured.  The names of the victims that Smith was charged with killing are Kevin Nettles, Ricky Nettles, Dennis Henderson and Maurilio Ponce.

The Nettles brothers were found with their heads wrapped in duct tape and Ricky Nettles’ stomach had been branded with a burn in the shape of a clothing iron, according to testimony during Smith’s preliminary hearing.

Smith was initially arrested in 2011.  His lawyer Michael Evans says that Smith maintains his innocence and he will appeal the convictions.   “My client’s facing life without the possibility of parole here, and I think he deserves at least the benefit of that knowledge.”

Also of interest were books about killing methods that were found in Smith’s possession, including titles such as Kill Without Joy!, Professional Killers: An Inside Look, and The Outlaw’s Bible.

No DNA evidence was presented, there were no murder weapons that were recovered, and no possible motives were addressed by prosecutors.

Kevin and Ricky Nettles were found shot to death after they were kidnapped from a car wash in Los Angeles, their bodies dumped about eight miles apart from each other.  According to the trial evidence, both were branded with U-shaped burns on their cheeks, and Ricky Nettles also sustained burns across his feet and abdomen.

Dennis Henderson was kidnapped by several gunmen, along with another man who was released.  Henderson was found in a rental car, stabbed to death with his body covered in over 40 non-fatal stab wounds that were inflicted before his throat was slashed.

The jury could not agree on a verdict in the killing of Ponce, who was a friend of Smith. Prosecutors argued that Smith lured Ponce to an Antelope Valley desert highway where the mechanic was then beaten, stomped and shot over a bad business deal.

Prosecutors determined in November 2014 that Smith would not be given the death penalty.  He will instead likely be sentenced to life in prison without parole.