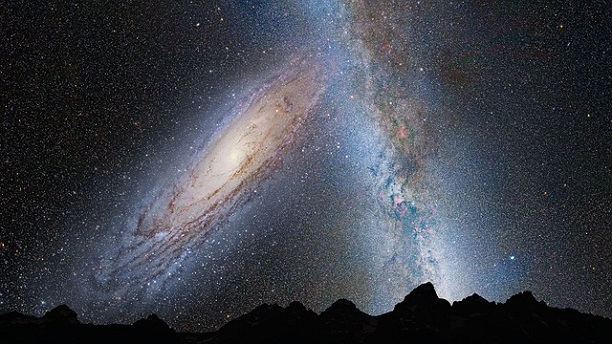 We may not be alone in space after all.

According to Caltech cosmologist Ranga-Ram Chary, an occurrence known as cosmic bruising – when one universe bumps up against another universe – might be able to explain an anomaly he discovered in a map of the cosmic microwave background.

The cosmic background shows bursts of ancient light, revealing the radiation signatures of the universe just a few hundred thousand years after the Big Bang. This ancient light is the result of recombination, when electrons and protons first teamed up to create hydrogen. Hydrogen gives off a limited range of visible light, so astronomers know what colors these ancient blobs should and shouldn’t be.

While mapping the cosmic microwaves, Chary discovered what he called “a mysterious glow“.  The glow he described is a color that should not appear on the cosmic background.

Our universe may simply be a region within an eternally inflating super-region.  Many other regions beyond our observable universe would exist with each such region governed by a different set of physical parameters than the ones we have measured for our universe.

Many scientists believe in the theory of a multiverse, but many others believe such theories to be nothing other than science fiction.  Princeton University’s David Spergel believes the idea of a parallel universe to be possible.  “I suspect that it would be worth looking into alternative possibilities.  The dust properties are more complicated than we have been assuming, and I think that this is a more plausible explanation.”

Chary knows that not everyone is going to believe him.  In his study in the Astrophysical Journal, he states that he tried to come up with other possibilities for the strange-colored glow, but so far has not been able to explain it in any other way.  He knows that his idea will face strong criticism from his peers in the astrophysical world.  “Unusual claims like evidence for alternate universes require a very high burden of proof,” he said.

Scientists are unsure if the proof is out there.