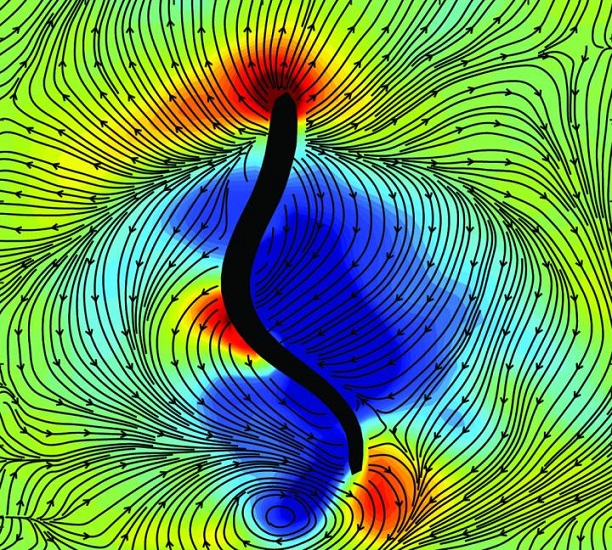 A group of Stanford engineers have discovered the secret to the low-energy, undulating motions that animals such as jellyfish have been using for millions of years to get around.  John Dabiri is one of the engineers who has been experimenting and researching the phenomenon.

It confounds all our assumptions… But our experiments show that jellyfish and lampreys actually suck water toward themselves to move forward instead of pushing against the water behind them, as had been previously supposed.

The scientists have spent years studying the unique propulsion of eel-like lampreys and jellyfish.  Their leader, Dr. Brad Gemmell, was astounded by the findings.  “It turns out that at least with some of the most energetically efficient swimmers, low pressure dominates and allows these animals to pull themselves forward with suction. Given our findings, we may have to rethink our ideas about some of the evolutionary adaptations acquired by swimming animals and how we approach vehicle design in the future.”

Gemmell stated that the example brought forth by jellyfish is especially vital “because the inherent unsteadiness of its swimming motion leads, at different points in the swimming cycle, to distinct manifestations of both the high pressure generation mechanism previously assumed to be dominant as well as the primary low-pressure, forward pull locomotion observed in the lampreys.”

The new understandings could also give a foundation towards advances in the design of underwater vehicles.  “For nearly 100 years, it has been assumed that mimicking natural swimming meant finding ways to generate high pressures to push water backward for thrust,” Dabiri said. “Now we realize we’ve had it backward, and so the search is on for ways to generate low-pressure suction to achieve more efficient underwater propulsion.”