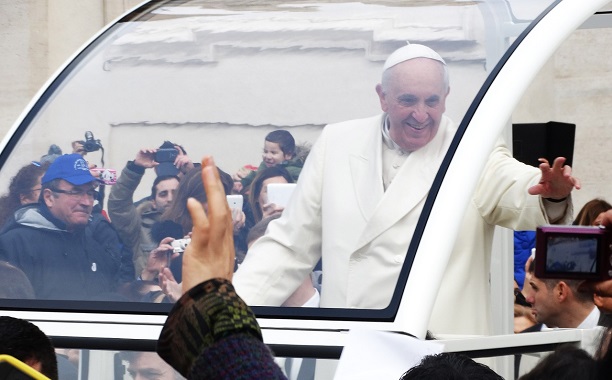 Pope Francis on Tuesday endorsed the use of force to stop the persecution of religious and ethnic minorities in Iraq following the series of brutal massacres of non-Muslims in northern part of the war-torn country under the hands of the Islamic State (IS).

Speaking to reporters, Associated Press reported, Pope Francis said it is only just to use force against the ongoing killings in Iraq’s Kurdish region, where IS–formerly called the Islamic State of Iraq and Syria–force Christians and other minorities like the Kurds and Yazidis to convert into Islam.

In these cases, where there is an unjust aggression, I can only say that it is licit to stop the unjust aggressor. I underscore the verb ‘stop.’ I’m not saying ‘bomb’ or ‘make war,’ just ‘stop.’ And the means that can be used to stop them must be evaluated.

Pope Francis said history shows world superpowers use the “excuses” of stopping an unjust war to justify the “war of conquest,” wherein the not only the country is being taken over–but also its people and its resources.

He emphasized the need of other nations to interfere with the conflict because one nation alone cannot stop such war.

Meanwhile, a new poll by the Pew Research Center and the USA Today showed majority support to U.S. military’s airstrikes against the Islamic militants there.

A total of 54 percent approve of the offensive while 31 percent disapprove, however, the report stated that “there is widespread concern about the U.S. becoming too involved in Iraq.”